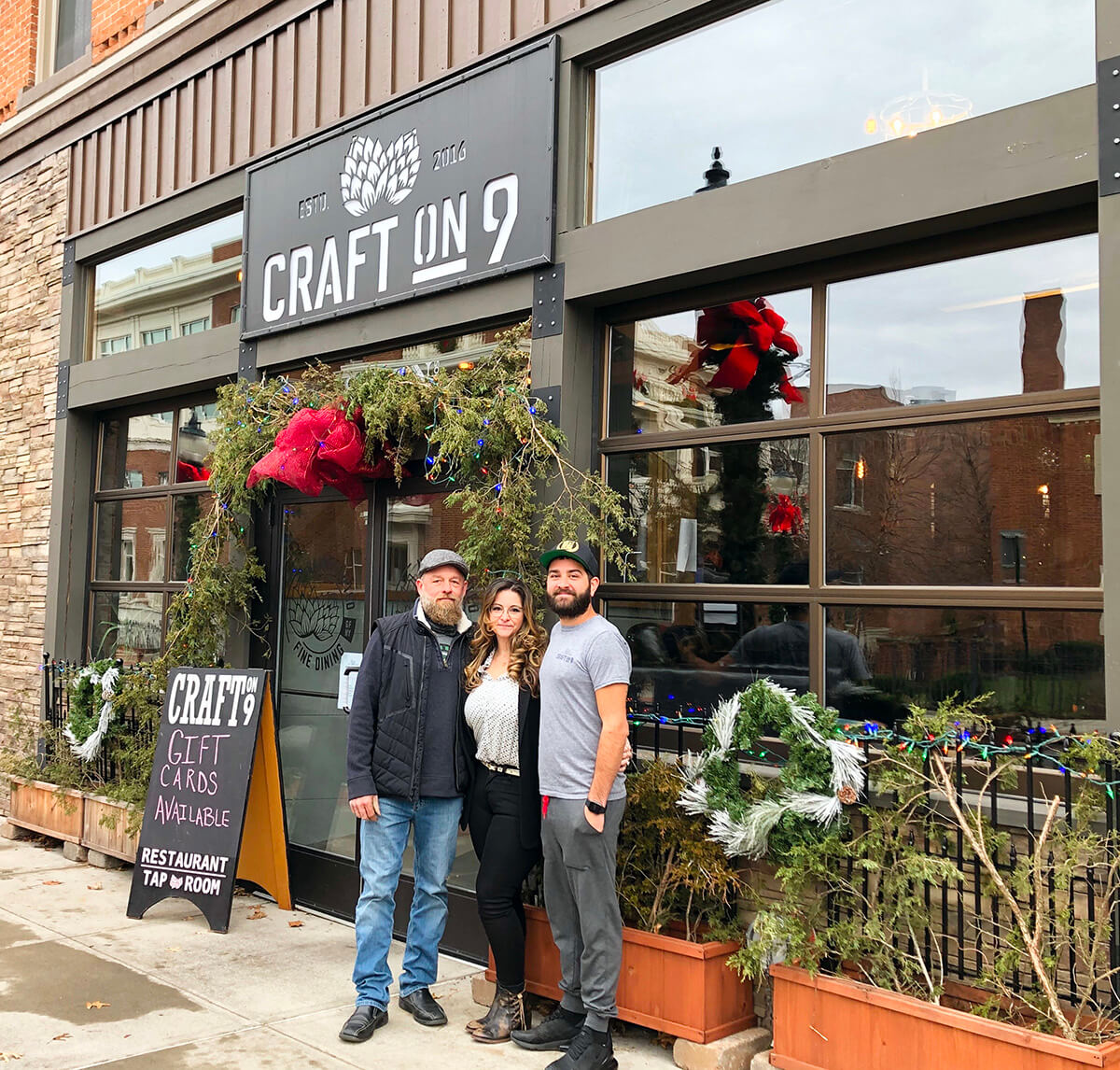 Talking with the Murphy’s, the family behind the popular Craft on 9 in Glens Falls, it’s palpable how much pride and passion went into developing the downtown bistro.  As its name suggests, all aspects of the experience have truly been “hand-crafted.”

Executive chef and owner, Rob Murphy is the visionary behind the restaurant, creating a memorable menu of upscale, locally-sourced dishes where everything is made from scratch.

Rob’s father, Jeramie, is a talented commercial builder.  His expertise was utilized in the transformation of Craft on 9, creating an impressive modern-industrial vision for the restaurant.

Rob’s mother, Maria, demonstrates a knack for interior design, manages bookkeeping and public relations, and leads a “family culture” among the Craft on 9 team.  It is clear how proud she is of the establishment and the staff–  particularly these past few months throughout the COVID-19 pandemic.

The Rise of a Tallulah-Trained Chef

Chef Rob Murphy has been working in kitchens since he was 15, most notably training with the late Chef Shawn Whalen, owner of the beloved Bistro Tallulah that once operated on Ridge St. in Glens Falls.

“My journey from line cook to chef happened at Bistro Tallulah,” said Rob.

As Rob gained greater experience in menu development and recipe creation, so did his desire to operate a restaurant of his own.  He approached Chef Whalen about purchasing Bistro Tallulah.  Nevertheless, Rob found his initial site in his native South Glens Falls.

“Though the timing wasn’t right to purchase Tallulah’s, Shawn was a huge support of Rob, helping us a lot.” said Maria.  Rob added, “He always said he knew he was doing something right if the best ones leave.”

Influenced by trips to restaurants around the country, and a love of high quality craft beverages and cocktails,  Craft on 9 opened in 2016 to rave reviews.

In 2018, developer Chris Patten (a longtime family friend of the Murphy’s) told the family he had purchased the 274 Glen Street building in Glens Falls.  He invited Craft on 9 to consider the corner space facing South Street.  While successful in the original location, Rob was only seeing one heavy dinner hour rush per day, and he knew his customer base would expand downtown.

In 2019, the Murphy’s (along with Chris Patten and many friends, family and staff) completely gutted and rebuilt their current location.  The footprint of where Mikado formerly stood (before moving to central Glen) rendered unrecognizable, with the new Craft on 9 featuring a multi-level dining room, an open kitchen behind a glass window, and the creation of two spacious areas for customers: the main dining room, and the cozier (but still spacious) bar area.

Restaurant veteran, Bill Dingman, who worked with Rob at Bistro Tallulah’s, was hired as the restaurant’s general manager. “I was intrigued and excited to help start another downtown business and assist friends Chris and Rob in making an impact on our little city,” said Bill.

The new Craft on 9 was officially open for business in September 2019.

A Tricky Transfer to Takeout

In March, Craft on 9 had only been open in Glens Falls for just under six months.  Business was booming, and the Murphy’s had planned on offering team members increased employee benefits. The day a new benefits program was expected to launch, all New York restaurants moved to strictly takeout.

“Suddenly we were unsure of everything,” said Maria.  “First and foremost, we wanted to protect our team.  We made sure food was regularly available for all of our staff and their families.  We helped every employee obtain unemployment.  We wanted to do our part to keep the community healthy.”

Though many restaurants quickly switched to takeout, Rob initially hesitated. “I didn’t want someone to try my food for the first time in a to-go container,” said Rob.

Craft on 9 temporarily closed, but once 50% capacity was allowed, they re-opened just before summer with all staff excitedly returning.

Ample outdoor seating was set up along South Street, and their spacious indoor space allowed for safe, socially distant dining.  Reluctantly, Rob also realized that offering takeout was inevitable, and he met with food container providers to determine which to-go vessels worked best.

Today, customers can regularly enjoy Craft on 9 takeout at home.

Though most online reviews applaud Craft on 9 for their creative dishes, there are also plenty of mentions of the great atmosphere, chic décor, music, and sound quality within the restaurant.  Said one Google reviewer: “Someone obviously put in A LOT of time and effort designing the space.”

“Whatever I like to eat, I put on the menu,” said Rob, explaining that dishes are inspired by bistros from all over the world. This is good news for customers who can choose either full or small plates, allowing for unique, memorable experiences with each visit.

Even the house burger (topped with aged cheddar, peppercorn bacon, and whole grain mustard on grilled brioche) has been a recent favorite of customers.  Rob noted that public safety officials have also made a point of complimenting the restaurant.

One online reviewer wrote: “The staff was very friendly, the beer list was great, and the food was even better! The restaurant was spotless and tables and chairs were distanced accordingly.”

While safe, the restaurant’s profits have inevitably been impacted by COVID-19 restrictions.  Rob estimates having turned away hundreds of customers, particularly throughout the fall months.

The Murphy’s credit the Adirondack Regional Chamber of Commerce for being “a rock” throughout these past few months.

“The Chamber has been a huge support, offering incredible communication and coordination of Zoom meetings to explain to us what we can do to help our business and our employees,” said Maria.

She added: “This community is our heart, and we want to see it survive.”

Special thanks to Hunt Companies, Inc. for supporting this story.

Amie Gonzales, President, and Juan Gonzales, Chief Financial Officer, said of Craft on 9:  “If you are traveling on I-87 then Exit 18, Craft on 9 is your stop. But this is true no matter where you’re headed.  The food and atmosphere are top tier. The team at CO9 have created a unique taste that’s all their own, and you won’t find another restaurant like it. Whether it’s your first or 21st visit there, you always feel welcome and right at home. We promise you will want to make this a regular stop in your future travels.”