Glens Falls native and member of the NBA’s Sacramento Kings, Jimmer Fredette was back in his hometown earlier this month to sign copies of his new book and give back to the community that has always supported him. He gave a speech at his alma mater and made a surprise announcement about the Indian’s receiving new basketball jerseys and gear. 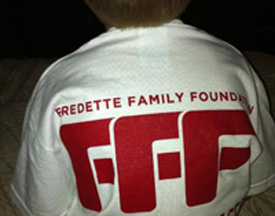 Fredette made an appearance earlier this month at the Civic Center to sign his new book, ‘The Contract.’ But before he signed his new book, Fredette was at Glens Falls High School surprising his hometown school with some gifts for everyone.

He announced that the Fredette Family Foundation partnered with Spalding and donated $40,000 worth of uniforms, shoes and shirts to Glens Falls Schools. Fredette made an appearance at an assembly at Glens Falls High School and debuted the new basketball jerseys he and his wife designed for the basketball team.

The basketball team will be receiving new jerseys, warm-up shirts and his signature Spalding shoes. About 2,200 students in grades K-12 received white shirts that read “GF Nation” in red on the front and “Building Character” on the back. The shirts were given to help celebrate “Dignity Week” and to remind students to build character too.