The Lake George Dinner Theatre has announced its 2013 production: ‘Moonlight And Magnolias‘, Ron Hutchinson’s behind-the-scenes look at the making of the classic film, Gone With the Wind! 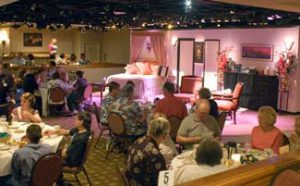 For those of you that simply can’t get enough of Scarlett O’Hara or just love a great comedy, you are in for a treat!

‘Moonlight And Magnolias’ is a comedy based on the real-life events and writing of the screenplay for the epic film: Gone With The Wind.

After two weeks of filming, legendary Producer David O. Selznick fires the movie director and shuts down production of his latest film because he’s unhappy with the way the way shooting has been going.

This leaves Selznick in a pinch. He decides he can re-write a new screenplay in a week.

Over five grueling days, behind locked doors, on a diet of bananas and peanuts, three characters frantically re-work the screenplay for what will become one of the most successful films in Hollywood history.

Tempers flare, hunger takes its toll, and as you might of guessed, hilarity ensues!

Lake George Dinner Theatre producer, Terry Rabine says ‘I was drawn to Moonlight And Magnolias because I wanted to offer our audience something a bit different for our 46th season. I was looking to get away from the romantic comedy genre that we’ve frequently produced at LGDT and was interested in the possibilities of a story that takes place in 1939. Hutchinson’s play, which has enjoyed a number of successful productions since its release in 2005, offered virtually everything I was looking for in a play and should be very popular with our audience.’