On December 20th, Glens Falls gets one of the best culinary experiences west of Tuscany.

Although Rare Earth owner Michael Belanger grew up in Ontario, has lived in Italy, and has worked in all but two South American countries as well as Hong Kong, the only place that feels like home to him is Glens Falls.

For those who don’t know what Rare Earth will be, the best I can do to describe it to you is ask you to imagine . . .

Imagine having the best French chef between Manhattan and Montreal (that would be Rare Earth head chef Paul Parker)–who once cooked a wild boar in the South of France for Belanger, soaking it in wines from the vineyard and using herbs from around the gardens outside the chateau, that Belanger later called the best meal he ever had–and imagine that chef creating a menu based on hand-selected wines that would be dispensed from a draft (a wine draft even with a Prosecco), with food cooked in a steam oven that costs more than most of the whole Rare Earth store, fresh oysters in the raw bar from a supplier in Boston no one around here can get a hold of, sitting at a 280-year-old Italian inlay table Belanger took during his travels in Italy, and learning about the wines you are drinking from an iPad on your table, the same iPad you ordered from and the same iPad you’ll pay on, although you won’t include tip as is Rare Earth’s “No Tipping” policy.

That large imagination may help you to understand what your first experience at Rare Earth will be.

“I think we all love the serendipitous nature of finding just the right thing to do in a given space,” says Belanger of the interior of the Rare Earth spot. “That emerges slowly in a project in space that already exists.” 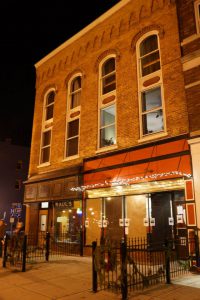 Belanger is creating a space in Glens Falls that even Manhattan would be jealous of. Every item (barring that one savings-account steam oven) in the space has been reused or repurposed, from the Montcalm old world mahogany cabinets and single-lumber mahogany bar, to the dragonfly purse hooks for under that bar. Lignum vitae, the hardest wood in the world (Belanger’s father got it from under the water where it grows as he worked making gears for hydroelectric dams) are now octagonal discs oiled and ready to use as serving plates for everything from terrines and pate to oysters.

Cheryl Clark, Paul’s wife, has been doing some finishing work in the painting and decoupage areas with maps. Late into the night Belanger is working on his bar stool prototypes that will look like champagne glasses (Rare Earth will also specialize in Champagne-based cocktails, one of Belanger’s favorites is the Dirty Pierre), and a chandelier of copper wire and empty bottles. A $5 marble slab is revamped with $2500 in custom iron work to make another setting for dinners to enjoy rare wines, perfectly-moist meats (remember that expensive steam oven?), and the kind of slow and social dining that keeps us infatuated with vacations to Italy.

“This stuff is stunning to see,” says Belanger about the details in the décor at Rare Earth. “The whole thing is beautiful.” 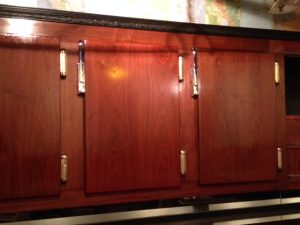 A former GE high-end executive with an MBA, Belanger now is happy to move away from large corporations and the hypocrisy that comes with that, to be able to provide the experience for his guests (not customers) that he has had travelling the world, eating some of the best food available and meeting all sorts of people, similar to a local Anthony Bourdain. That experience includes wines from such small vineyards (Belanger has kept 300-plus contacts from everywhere he has traveled and will bring in cases from a few each month and have Parker create an accompanying menu item; when the wine is gone, he will bring in more from another boutique vineyard somewhere in the world) that would never dream of having their wines tasted in America, to fresh ceviche thanks to Parker’s connections with a Boston-area supplier who doesn’t cross the Hudson for just anyone.

Parker, who ran the extremely popular Chez Sophie in Saratoga Springs, will be dealing with only the best ingredients including wild game meat and proteins that Parker and Belanger choose from specific areas and farms in America so they know the pedigree they are dealing wtih (similar to the European meats that are packaged from the province they come from).

“I refuse to buy any meat from mass-produced farms; it’s just de-humanizing the way they are raising our chickens,” says Belanger, who was raised on a farm and not a stranger to the hunting and preparing of meat the old fashioned way. “Actually, it’s de-chickenizing.” 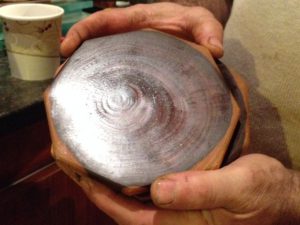 Parker himself has more than 35 years in the business following on the heels of his mother Sophie, of Chez Sophie fame. He has been written up in the New York Times and is known as a Chef’s chef.

“Having travelled with Paul I can attest to the fact that he is wildly passionate about food and cooking and I count dishes he has made at the top of any dish I have had in my life, which includes 18 years of expense account living around the world,” Belanger explains. “As he put the menu together it has literally made my mouth water and I find myself waking up with the taste of cold poached lobster and an accompanying glass of Viognier in my head.”

For his part to the menu, Belanger is contributing his world famous family of bruschetta’s to the menu, first taught to him in Florence, Italy, by his girlfriend at the time, a Sicilian belly dancer. Each wine will be paired with a dish just large enough to enjoy with one glass.

“The idea of serving just the right amount of food to be consumed with one glass of wine will enable our customers to experience a broader array of flavors without breaking the bank as it were,” says Belanger. “Just think …25 wines by the glass and 25 accompanying plates of food…changing and evolving over time…it’s mouth watering just to think of it.” 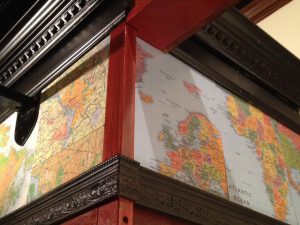 And Belanger has learned the wrong way to run a business from his time as a suit and the right way thanks to his innate ability to connect with like-minded, positive people. The “No Tipping” rule, for example, means that any amount left as tip will go to a local charity. This isn’t to confuse Belanger as a simple humanitarist, he is just a smart business man; he helps others, others will help him (in this case, hopefully the charities will stop in to enjoy a meal or two and tell their friends).

“I must say I also like the help-your-neighbor sensibility here that makes it stand apart from places like Saratoga and Troy,” says Belanger of the Glens Falls location choice. “It is far and away the most economical place we looked between Albany and here and the population within 15 minutes of us is more than 100,000, and there is really no one else competing for the same customer base we are looking for.” 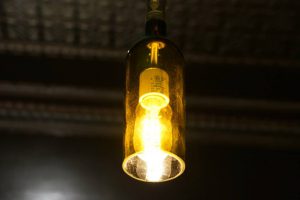 Another Belanger fingerprint is the way the concierge (not chefs, not waiters, not bartenders) staff will be trained; everyone will at one point during the week work everyone else’s job in order to show each staff member how much goes into servicing the customer from all aspects. For example, the bartender will wash dishes one night; what’s a good bartender and a spectacular vintage if served in a spotty glass? (Also of note, there will be no spotty glasses here as Belanger opted for the high-end high-temperature dishwasher, eschewing the low-temperature one Chocolate Mill left behind as well as everything else they didn’t see need for from the past tenants.)

For a special reservation, guests can sit at a bar in the kitchen and watch Parker work and entertain. Even more exclusive will be the downstairs (walk through the three kitchens and downstairs to the basement past the cold stone walls) lockednwine room. The cedar-walled wine room, accessed only from a fingerprint from Belanger, will house Rare Earth’s many wines including the 3 or 4 high-priced exclusive wines he will carry at a time, and a table for special dinners. 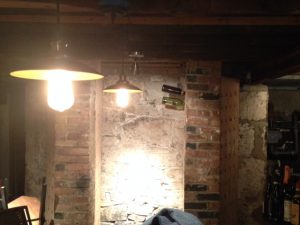 Rare Earth is hoping to open around December 20, and hopes to one day expand to offer a retail store for the wines Belanger is bringing back from his small, hidden vineyard friends all over the world. He also hopes to start taking area oenophiles and travelers on tours to some of his secret vineyards, the idea of which spurred Rare Earth once upon a time.

“The idea of the place flowed from the business strategy I had years ago in controlling the product from ‘the grape to the glass,'” explains Belanger. “So much of the value of wine is given away to distributors on any given bottle. Take for example a ‘good wine’ in France….it might cost between 1 euro 50 and 5 euros for a good wine in the bottle ready to ship…so the distributor makes $7.5 to $25 a bottle and the retailer makes $5 to $15. Everybody makes more than the guy who makes the wine and I don’t think that’s fair or right.”

If Rare Earth is successful, the initial dream of sharing his priceless life experiences with those members who want access will happen. Knowing Belanger and Parker’s successes and skillset, I suggest the early reveres get in now, and be able to say we were one of the first to be a part of the Rare Earth experience.

“I think Glens Falls is ready for this kind of place and this kind of approach,” says Belanger has he prepares the front of the house for his first guests on the 20th. “We are sophisticated but not stuffy, serious about food and wine but fun as well, knowledgeable but not in a dictatorial way…its all about experiencing things and working with flavors in both wine and food and something I think Glens Falls has already demonstrated it has a taste for.”