Though new author Richard Duvall grew up in Long Island and now resides in Greenwich, NY, he’s always fostered a love and interest for China.

After extensive travel through China in the eighties and nineties, Richard was inspired to write a techno-thriller novel about a Chinese-American conflict that could bring America to its knees.
Duvall’s first novel, The Ox Factor, takes place in 2027, when a Chinese supercomputer brings down the U.S. defense system, allowing thousands of Chinese troops to invade the United States.

The story follows Ox, the only computer programmer who knows how the Chinese accomplished the cyber-attack, and must now devise a survival strategy with U.S. President Elizabeth Rutledge (yes, a female president!).

With the issues of foreign invasion, cyber security, and national security on hand, Duvall is pulling out all the stops for this debut novel. 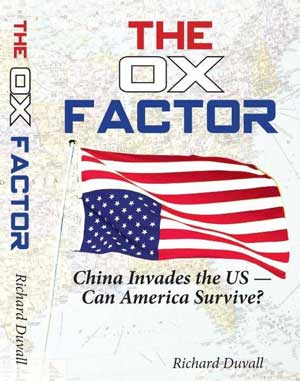 If you’re like me and usually stick to the classics, Duvall’s book may sound a little intimidating. One of Duvall’s close friends admitted, “I could not put it down, even though I did not think it would be something I would like.” That’s reason enough for us less adventurous readers to give it a try in the new year!

Locals will be happy to know that The Ox Factor is stocked on the shelves of Northshire Bookstore, the book’s publisher, located in downtown Saratoga Springs.

The book is almost sold out on Amazon, so you’ll want to grab your copy soon! You can also find The Ox Factor at Barnes and Noble.

Get your copy of The Ox Factor and let us know how you like it by commenting below or visiting Richard Duvall’s fan page!