Three food-related headlines caught our attention recently. Check them out! 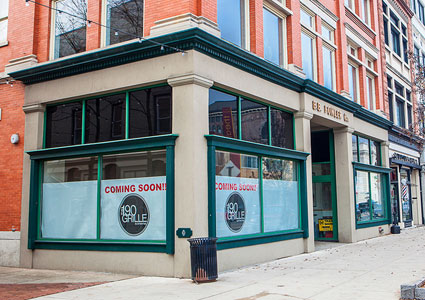 Within the next few weeks, it will once again be possible to enjoy dinner and a movie simultaneously in Downtown Glens Falls! 190 Grille & Cinema is now open in the former Aimie’s Dinner and a Movie location in Glen Street’s B.B. Fowler building and is serving a great menu of upscale comfort food and a wide variety of beer, wine, and mixed drinks.

Currently, only the bar and non-theater seating are available, but owner Heather O’Neill told the Albany Business Review that the first of the space’s pair of theaters should be up and running “in the next week or two.”

190 Grille & Cinema is open daily at 11:30am, and offers lunch and dinner. Stop by and experience the new venue for yourself!

After more than 80 years of ownership under the Russo family, Massie’s – the popular Italian eatery on Main Street in South Glens Falls – has a new owner.

Chef Jonathan Greenwood has taken over the establishment, but has chosen to keep its name and most of its decor intact. Greenwood was most recently employed as a chef at Copper Mountain in Colorado, but was previously executive chef at Lake George’s Dunham’s Bay Resort.

Massie’s was opened in 1929 by Ralph “Massie” Russo and was run by his sons following Russo’s death in 1992. Greenwood announced on the restaurant’s Facebook page that the January 29th re-opening was a resounding success.

The historic Merrill Magee Inn property on Hudson Street in Warrensburg dates back to 1839, and recently received a new lease on life. Donna and Mike Flanagan purchased the estate at a foreclosure auction in 2014 and have since made a significant investment to rehabilitate the property.

The result of their hard work is a revitalized guest house, restaurant, and tavern, all of which are now open!

The restaurant includes a great room with a two-story fireplace, plus other small dining rooms. The tavern features a pair of fireplaces and comfortable seating. The inn contains 10 guest rooms complete with new linens, flat screen televisions, private baths, and brilliant views of the Adirondack Mountains.

Next on the Flanagan’s list is to rework the grounds and the pool – said to be the oldest private pool in New York, dating back to 1928.

The tavern opens at 4:00pm Wednesday to Sunday, and dinner service is available starting at 5:00pm. Stop by and experience this restored Adirondack gem for yourself!