With the new retail and lodging development that’s set to take place near Exit 18 in Queensbury, it’s only a matter of time before the Main Street corridor’s congestion becomes a hindrance for those attempting to travel from I-87 to Downtown Glens Falls. A new proposal, though, will have traffic flowing smoothly within the next two years. 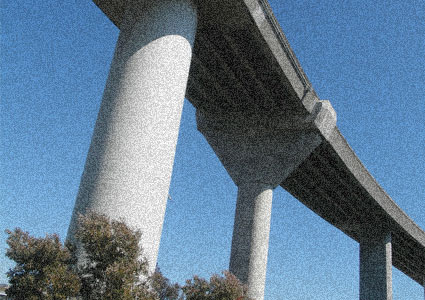 Artist’s rendering of Exit 18 Expressway
The proposed Exit 18 Expressway is a raised highway that will carry travelers above Main Street and Hudson Avenue, allowing them to bypass the traffic lights on their way Downtown. The Expressway will let cars off near Glens Falls Hospital where the new mixed-use building is currently being developed.

After exiting the Expressway, commuters will be just two blocks from Centennial Circle and the heart of Downtown Glens Falls. They will also be able to quickly cross the bridge into South Glens Falls.

Not only will the Exit 18 Expressway help expedite morning and afternoon commutes, but it will also draw more visitors to events at the Civic Center and other facilities Downtown. Those who once may have avoided the area because of the traffic will now be able to frequent local businesses and attractions, giving the economy a boost.

The project is currently pending approval, and construction will begin once permits are issued. If all goes as planned, the Exit 18 Expressway will be opened to traffic by April 1, 2018.

*April Fools! But this would be a pretty cool idea…