Another talented alum of Adirondack Theatre Festival has made it big on Broadway, but you don’t have to make the trek to the Big Apple to witness his theatrical genius. ATF’s most recent Tony Award nominee is also the playwright of one of the Festival’s 2016 shows! 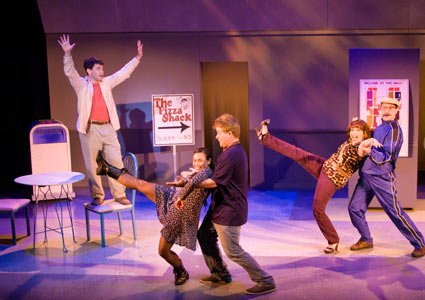 Photo provided by Adirondack Theatre Festival
Alex Brightman’s performance as Dewey Finn in School of Rock has earned him a Tony Award nomination for Best Performance by an Actor in a Leading Role in a Musical. School of Rock, adapted from the Jack Black movie, made its Broadway debut on December 6th of last year.

Originally from California, Brightman caught the acting bug at just eight years old after seeing Cats on Broadway at the Winter Garden Theatre. He eventually made his way to New York City, and is now performing on the same stage where Cats captivated him!

Before originating the role of Dewey Finn, Brightman appeared in Adirondack Theatre Festival’s 2011 production of Hello Out There (pictured above). He has also entertained Broadway audiences in Big Fish, Matilda, Wicked, and Glory Days.

Brightman returns to ATF this summer, but this time behind the scenes as the playwright of Everything in Its Place: The Life and Slimes of Marc Summers. The show – an exploration of the life of TV personality Marc Summers, featuring music by Drew Gasparini – will make its ATF debut in August.

Producing Artistic Director of ATF, Chad Rabinovitz, selected Slimes for this summer’s lineup after collaborating with Brightman and Gasparini on a musical titled Make Me Bad about two years ago.

“We enjoyed working together and when I asked them what else they were working on they mentioned Slimes,” Rabinovitz said. “I was a huge Marc Summers fan growing up (and still am) so I was immediately interested. We’ve been developing the show for about a year now and Marc has been heavily involved in the process. . .This show is also different than any other of its kind – we’ll actually play Double Dare for a bit, share a lot of laughs, but it’s also incredibly moving.”

You can experience Slimes for yourself at ATF this summer, August 10-13. Congratulations to Alex Brightman, and we can’t wait to tune in for the Tony Awards next month!