We have to ask – who has the best hot dogs in the Glens Falls Region? 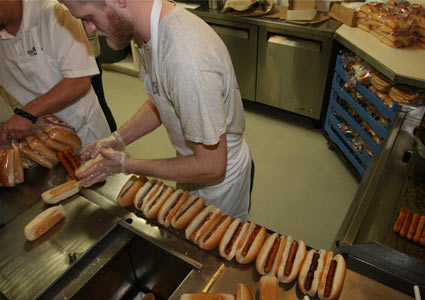 New Way Lunch
For hot dog fans in and around Glens Falls, one of the first restaurants to come to mind is probably New Way Lunch.

New Way Lunch is also known by several other names, as the nickname seems to change with each generation. You’ve probably heard of “Hot Dog John’s,” “Dirty John’s,” “John the Hot Dogs,” or “John the Hots.” Its hot dogs are known as “dirt dogs.”

The family-owned business has three locations: Glens Falls, Queensbury, and Warrensburg. New Way Lunch has not changed its recipe in more than 90 years.

On the recipe, she says, “When I was in high school, we loved this place called New Way Lunch. They sold Dirty John’s Dirt Dogs. These dogs have been a constant inspiration whenever I write a recipe for chili dogs, hot dogs, or chili with hot dogs in it.”

Openly seasonally, Zack’s Drive In of Hudson Falls is another local favorite, with many area residents having fond memories of their parents taking them to this old fashioned car-hop service restaurant every summer.

Zack’s has a signature meat sauce like the other area hot dog spots, but it’s considered to be spicier, with the dogs dubbed Texas Hots. The restaurant has been serving their dogs with the secret sauce since 1944.

“Some say it’s too hot, others say it’s not hot enough. But we try to find a happy medium,” owner Jeff Rehm told The Post Star in 2003.

As one Yelp reviewer from 2009 put it, “The best hot dogs-with-sauce anywhere. Ever. Period. For the last 40 years our family’s summers have been organized around maximizing the number of visits to Zack’s.”

Another Hudson Falls eatery with amazing dogs is Uncle Louie’s World Famous Dog Shack, better known as simply The Dog Shack. The Dog Shack is indeed a shack, making it a tight squeeze for customers, but fans don’t seem to mind.

The Dog Shack, like the others, serves their dogs with Upstate New York’s favorite toppings of onions, mustard, and most importantly, the meat sauce. The Dog Shack adds a nice touch with toasted buns,

and you certainly can’t beat the price.

This restaurant seems to incorporate elements of its competitors: the buns are toasted like The Dog Shack’s, they offer car-side service like Zack’s, and of course, there is the meat sauce/mustard/onions topping, although that particular combination is called a “zookie dog.”

If you don’t want to opt for a waitress to come right to your car, you can feel free to make use of the outdoor seating, which reportedly is very well kept.

A reviewer on Facebook said in April, “We have never had a bad experience. Food is always fantastic. . .Service is quick and attentive. The biggest thing for me is cleanliness. I can’t stand eating anywhere outside that I feel is overly grimy but the tables and benches are kept very clean.”

Which is your preferred spot to go when you’re craving the comfort of a great hot dog – New Way Lunch, Zack’s Drive In, The Dog Shack, or Mr. Bill’s? Or, do you have a favorite we missed? Let us know!