After months of speculation it has been confirmed that Will Smith, Queen Latifah, Lionel Richie, and other well-known names are investing in Just Goods, Inc., parent company of Just Beverages. Headquartered in Glens Falls, Just Beverages is known for its alternative, recycled packaging. 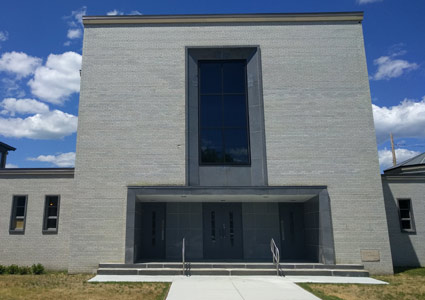 Just Beverages, in the former St. Alphonsus Roman Catholic Church building
There were rumors about Smith being in the area in December; the time-frame has not been proven, but the fact that Smith has visited Just Beverages in Glens Falls was confirmed by Jim Siplon, the company’s Chief Operating Officer.

According to Siplon, Smith became interested in alternative packing for water about seven years ago when his son read an article about an island that was polluted by plastic washing ashore from the ocean.

Glens Falls Mayor Jack Diamond was invited to meet with Smith when he was in the area but the timing did not work out. He is nonetheless thrilled about Smith’s active interest in the company.

“Not every day you get an opportunity to have famous celebrities not only come to your community but invest in it,” Diamond told The Post Star.

Smith’s exact role in the company has not been disclosed; his and other celebrities’ overall involvement was intentionally kept quiet for quite some time.

“We needed to find out, ‘Is it going to be embraced on its own merits?’” Siplon told The Post Star, regarding the decision to keep big names out of the marketing.

Indeed, JUST Water is doing well and has been since before celebrity involvement was announced. Distribution in one year’s time has reached 13,000 stores in every state in the US and every province in Canada.

The company headquarters and packaging plant is at the former St. Alphonsus Roman Catholic Church building on Broad Street in Glens Falls. Just Goods, the parent company, has offices in Los Angeles.

According to the JUST Water website, the water bottles are made from 53% paper from certified forests, 28% plant-based plastic, 15% traditional plastic, and 4% aluminum.