Planning is underway for the $10 million Downtown Glens Falls Revitalization, and the local project committee leading the initiative would like your input! Not only can members of the public participate in upcoming meetings, but now there is an online survey where you can help prioritize the projects you feel are most important for downtown. 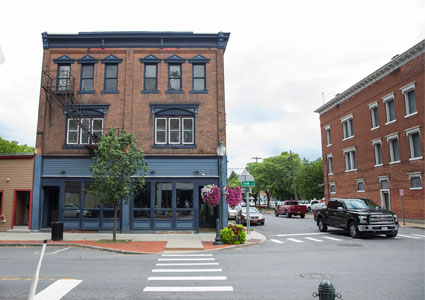 Photo Credit: Office of Gov. Cuomo
Downtown Glens Falls was awarded the $10 million grant for multiple reasons, including its compactness, accessibility, street network, job market growth, and more. This significant grant will allow our vibrant downtown community to continue to grow and transform.

Since the announcement of the grant, a local planning committee made up of stakeholders from Glens Falls has worked with private sector experts to determine the most essential downtown projects.

Basically, the committee has compiled a list of at least 43 projects and concepts that were a part of past development studies and plans. As discussion about the initiative continues, some of these projects will be removed from the list, and others will be added.

Glens Falls Industrial Development Agency Chairwoman Judith Calogero, a committee member, told the Post-Star, “You’re going to see some things fall off that list that won’t be eligible.” In other words, the final list of projects will include those that would only be possible through the grant.

South Street, also known as the “Street of Dreams,” will be a major focus of the Downtown Revitalization Initiative for Glens Falls. Many of the proposed projects would include transforming older and run-down buildings into mixed-use ones featuring housing and businesses.

If you’re interested in learning more about the proposed projects for downtown Glens Falls, you can view them on the EDC Warren County’s Revitalization Initiative website.

In addition, you can take an online survey and let the committee know which project ideas are high priority. Some of the questions include ranking the most beneficial transit options and which types of stores you’d want to see more of. The survey will be open until November 23, 2016.

Over the next few months, there will be multiple public meetings where you can voice your thoughts about the initiative. All of them will be held at Crandall Library:

The deadline for the committee to present its final project suggestions to New York State will be late February 2017.

What projects would you like to see happen in downtown Glens Falls?