The Adirondack Thunder made an announcement this morning that the Adirondack Civic Center Coalition, Inc. has reached an agreement with the Calgary Flames to purchase the ECHL franchise. Not much is going to change before the end of the current season, in which we could see the Thunder playing for the Kelly Cup. 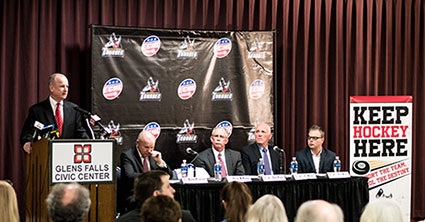 “Owning the Adirondack Thunder allows us to control our own destiny, and focus on the long-term success of hockey and the Civic Center,” said Daniel J. Burke, president of the Coalition.

The team has received enormous support from the community, and recently set a franchise record for a sold-out crowd of 5,135 people at the Civic Center. When asked about the team’s existing affiliation with the Calgary Flames, ECHL Commissioner Brian McKenna stated that the conversation on that would start after the 2016-2017 season.

One of the greatest benefits included in the deal will keep all profits generated by the team in Glens Falls, supporting either the Civic Center or the Thunder.

It looks like hockey is here to stay in Glens Falls for the foreseeable future!