One of the projects announced in Gov. Cuomo’s 2017 State of the State agenda was the 750-mile Empire State Trail, which would travel from Albany to Buffalo and NYC to Canada. The statewide trail is expected to pass through Warren County, but some local supervisors believe highway projects should be a priority over a recreational trail. 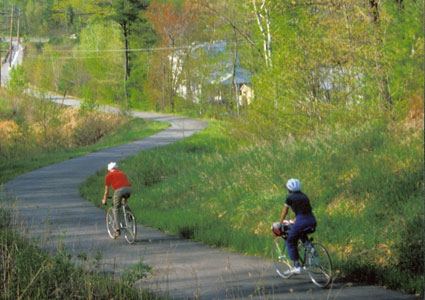 The NYS Empire State Trail, if completed, would become the longest multi-use trail in the U.S. The project is estimated to cost $200 million over three years, and the goal is to attract hikers, bicyclists, and xc-skiers to local communities.

To create the statewide trail, NYS plans to fill in the missing links between existing greenways and trailways. In the Glens Falls Region, the trail could become a part of the Warren County Bikeway and the Feeder Canal Trail.

However, as reported by the Post-Star, Warren County supervisors are divided over their support of the trail in the area. At a recent meeting, two of their main concerns included:

On the other hand, the Empire State Trail does have its supporters. According to the Post-Star, Glens Falls 1st Ward Supervisor Dan Girard brought up how the county has also focused on other projects instead of highways.

Not only that, but many believe the trail would help attract tourists to the region. Local group Warren County Safe & Quality Bicycling Organization would like to see Queensbury strongly connected to the Empire State Trail in the future.

While both sides have valid arguments, a majority of the Warren County supervisors voted in favor of supporting the trail’s development.