Bad puns aside, MARVEL Night is coming to Cool Insuring Arena on Saturday, November 25th when the Adirondack Thunder take on the Reading Royals. The game starts at 7:00pm. 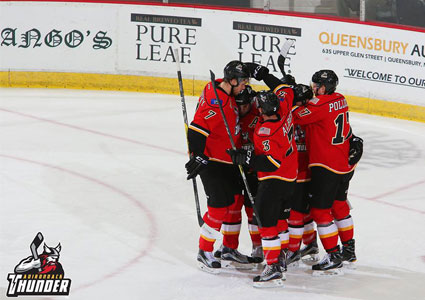 The Thunder will be wearing special Thor: Ragnorak-themed jerseys on the ice to celebrate MARVEL Night. The jerseys, which feature Thor’s hammer on the front, will be auctioned online.

Have family in town for Thanksgiving? Bring them to the game! The Thunder have announced a great deal for this game, the Subway Four Pack. Each four pack, which costs just $64, features four tickets to MARVEL night, four Thunder hats, four 6-inch subs from Subway*, and four games of bowling at Kingpin’s Alley. Four packs and tickets can be purchased online, by telephone, or at the box office during regular business hours.

*You’ll be issued four vouchers for a 6-inch sub, redeemable at any participating Subway location