Our favorite local hockey team has put out their schedule of special events and deals for this month. Check out what’s going on with the Adirondack Thunder, and then mark your calendar! 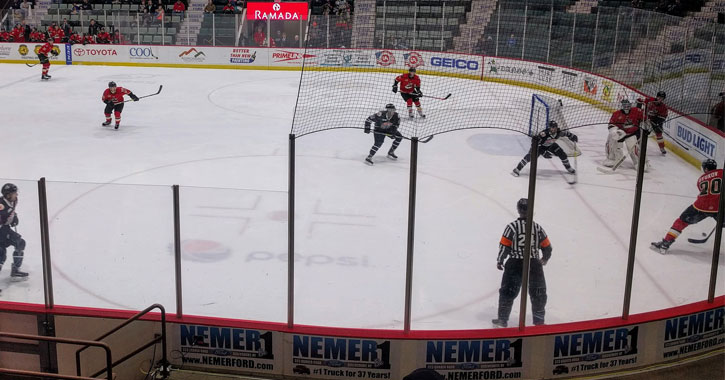 Saturday, December 23rd, will be a full holiday celebration with Santa Claus and an ornament giveaway for the first 1,000 fans.

Sunday, December 31st, will be the special New Year’s Eve game – New Year’s Eve hockey has been a tradition in the Glens Falls area for years, so don’t miss out on this welcoming of 2018! You can take advantage of a “2 for $20.18” deal to commemorate the New Year.

Fidelis Care Kids Free Friday will be promoted in December, with the games on the 8th and the 15th. Kids get in free with the purchase of a full-priced adult ticket.

Older kids can take advantage of deals too – Wednesday games on the 20th and the 27th are Student Discount Nights. Show your high school or college ID at the box office and get $5 off admission to either game.

The month of December is also Thunder Holiday Stocking time. The Holiday Stocking consists of four tickets, a jump pass to Skyzone, and an autographed Thunder puck for $64. The tickets can be used for one of five top home games: December 23rd, January 27th, February 24th, March 10th, or March 31st.

This is a great gift idea for the hockey fan in your life, particularly since there’s some flexibility offered with the tickets!