Get ready, hockey fans: although the 2018 postseason recently ended for the Adirondack Thunder, the team has wasted no time getting ready for next season and has officially announced its 2018-19 home season schedule. October may still be far away, but it’s never too early to mark your calendars! 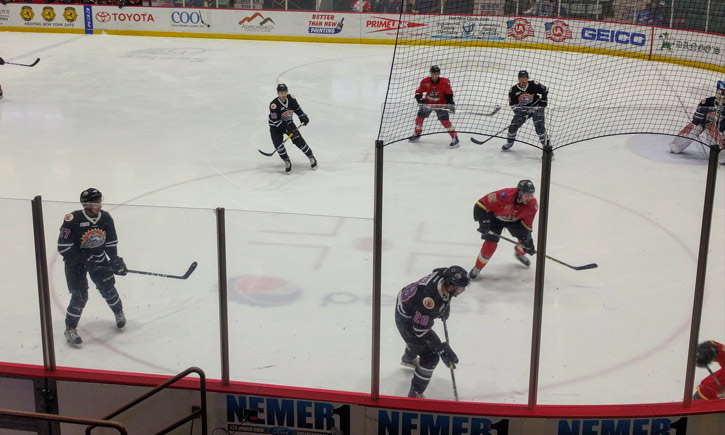 2018 kicks off for the Thunder on October 13, when they will be visiting the Maine Mariners. Their first home game at Cool Insuring Arena is set for October 20 at 7 PM against the Brampton Beast, part of a home schedule which consists of 36 games between October 20 and April 7. For its final regular season home game, the Thunder will host the Worcester Railers in a rematch of the first round of the 2018 Kelly Cup Playoffs.

December and March are looking like The Thunder’s busiest months on home ice, each with eight games and a total of eight Saturdays. Five home games will be played in October, three in November, seven in January, three in February, and two in April. 33 of Adirondack’s 36 home games will be played within the North Division, which now includes new opponents Maine and St. John’s. Away dates include games against Florida, Fort Wayne, Kalamazoo, and Cincinnati.

“For the second straight season, we are thrilled to be able to offer a very fan-friendly schedule with a heavy focus on weekend and holiday home dates in Glens Falls,” said Cool Insuring Arena General Manager Jeff Mead in a statement. “With 30 of our games being played on either the weekend or a holiday, we feel that our 2018-19 schedule is the best that we’ve ever offered to our fans in our four seasons in the ECHL.”

In addition to their 2018-19 season announcement, the Thunder’s have extended their affiliation agreement with the NHL’s New Jersey Devils and AHL’s Binghamton Devils for one additional year. The Devils have been the Thunder’s official NHL affiliate since August 8, 2017 following an “informal working agreement” during the 2015-16 and 2016-17 seasons.

As in the past, the teams will continue sending players between levels in the coming season. Last season, four players on New Jersey or Binghamton contracts, including goaltender MacKenzie Blackwood and defenseman Colton White, spent time with the Thunder.

“We had an incredibly successful start to our affiliation last season, seeing players go from Adirondack to the NHL and vice versa with the Devils and we look forward to seeing what year two brings,” stated Adirondack Thunder Alternate Governor Ed Moore in a statement.”Working with Ray Shero, Tom Fitzgerald and the entire Devils organization has been a pleasure and we’re eager to grow those relationships.”

For season tickets and more information, visit ECHLThunder.com or call 518-480-3355.