The Adirondack Theatre Festival (ATF) kicked off its 24th season Thursday night, June 14, with a preview of Some Lovers which opens tonight. This new musical, created by Academy Award, Grammy and Tony winners, was everything you would expect, and more. All new music from the legendary Burt Bacharach, an original story by Steven Sater, and four very talented performers combined to deliver a performance that was captivating and beautifully sung. 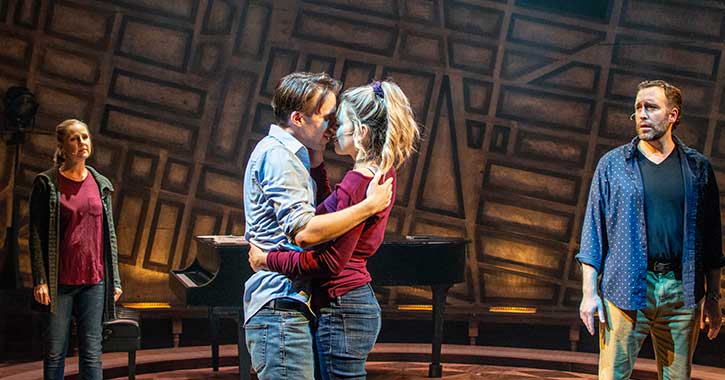 Sandra Denise as Molly, Chris Hoch as Ben, Andrew Mueller as Young Ben and Emily Schultheis as Young Molly took us on a journey through the joys, the regrets and the words left unsaid between a couple who love each other, but haven’t always liked each other, or themselves.

The musical choices beautifully balanced duets, solos and harmonies. When the talented foursome sang together — it was excellent. The harmonies were tight and the layering of voices between the current and younger versions of Molly and Ben, beautifully echoed the story. In addition, each of these gifted performers held their own on the solos. A favorite of the night for me was Welcome To My World, sung by Andrew Mueller as Young Ben. The musicians behind the curtain were also excellent. I was especially delighted by the flugelhorn, which had a lovely, almost haunting quality to the sound.

The Charles R. Wood Theater is an intimate performance space; only a few feet separate stage and audience. The set was simply, but smartly, done. The backdrop and lighting echoed the streets of Manhattan and the piano was the center around which the story revolved, including the stage. Those of us in the preview audience were treated to an insider’s peek behind the scenes when the production was halted to remedy a communication glitch involving the stage’s rotation.

If you haven’t yet made plans to attend Some Lovers, you will definitely want to do so before the show’s last performance on June 23.

Never attended the Adirodack Theatre Festival? This professional, not-for-profit theatre features productions of original works crafted specifically for the festival and uses actors who are all members of Actors’ Equity Association — performers in Some Lovers boast impressive resumes that range from Broadway and Off-Broadway to television and film.

ATF’s upcoming performances include an adventure musical, a tap musical, a dramatic comedy and special events that range from a concert reading to a dinner theatre for kids. Check out the full schedule and see something new this summer!