Hacker Boat Co. is awaiting a new season, located now in Queensbury where it acquired a 6.4-acre manufacturing and office complex less than a year after moving its operations there from Ticonderoga.

The move to Queensbury was necessitated in part by a simple need for more space. Hacker now has 40,000 square feet to work in, about 25 percent more than before in Ticonderoga.

The former recycling plant has been completely remodeled and retrofitted for new boat building and restoration jobs.

“We reinsulated everything, new walls, new lighting, all new piping, compressed air, electrical and pressed air drops,” said owner and CEO George Badcock, who purchased the company 11 years ago. “We also have a wood and varnish shop where we work on all the pieces.”

The Fort William Henry Museum, a restoration of historical significance to our democracy, located on the southern shore of Lake George, and nestled amid New York’s Adirondack Mountains, has introduced a new Augmented Reality (AR) exhibit for the 2022 season.

The new AR experience, created by Frameless Technologies, puts the viewer directly into the siege of the British fort by the French on August 8, 1757. It features a bird’s eye view of the Fort, the Entrenched Camp, and the French siegeworks firing at the Fort itself. Viewers can manipulate the AR by moving their phones to explore more of the surrounding area.

“These community led projects are the embodiment of the needs for the Adirondack region, from preserving our history through Fort Ticonderoga and Glens Falls historic buildings, to addressing the need for more child care programs and modern infrastructure to help Warren and Washington counties grow like never before,” said Schumer.

The investment in the Adirondack region includes:

• $439,000 for City Hall. It will fund substantial structural renovations and energy upgrades. Glens Falls City Hall was built in 1900 and has served as the headquarters of the city’s civic affairs since Glens Falls was incorporated as a city in 1908. The building is a part of the Three Squares Historic District which is on the National Registry of Historic Places for the areas prevalence of unique and influential architecture. Work includes a new roof, replacing the gas-fired boiler heating system with a high-efficiency heat pump and heat recovery system, to make the building more eco-friendly.

The Adirondack Regional Chamber of Commerce is involved in a search to replace its president and CEO, Michael Bittel, who has announced his retirement from the organization.

Bittel will be retiring in June.

“It has been an honor to love and serve our great region for the past four years,” Bittel said of his tenure Our community is so wonderful because of our greatest asset, our people.”

The ARCC board of directors of hired Bittel in 2018. He took the reigns from Marti Burnley, who was named interim president after Tori J.E. Riley left the position in September of 2017.

“I have been spoiled to work with a great team at the ARCC who will carry on the torch of loving and serving our community,” said Bittel, expressing thanks to the ARCC Board and his staffers Paricia Rogers, Amanda Blanton, Carol Ann Conover and Karen Mattison.

“I have worked extremely close with Michael since his arrival at the Chamber in 2018,” said Marc Monahan, ARCC board chair and regional executive vice president of NBT Bank. “From day one, Michael showed up ready to work and connect the Chamber with our entire business community. Throughout his tenure with the ARCC he has shown a passion, drive and desire to help all of our members and supporters.

“Although the past couple of years have been extremely challenging as we navigated the constant pressures of the pandemic, we are stronger today than ever before”

Monahan said the ARCC team “is committed to continue to collaborate, educate, connect, and advocate during this transition. We are already hard at work to find a new leader for the ARCC. The next person will certainly have big shoes to fill, but we are confident we will find the right person.”

Rick Grabowski has moved his Amore Pizza next door, doubling the space, including more spacious room for food preparation and production.

The new location, the former TD Bank North at 340 Aviation Road, Queensbury, opened over a month ago.

“Everything is new” in the space, he said. They spent seven months renovating the premises before they moved in.

“Our new storefront has lots of windows, offering a bright and inviting space,” he said. “We’ve been needing more room to cook for many years.”

The shop can now seat about 20 customers for indoor dining but is still primarily a take-out and delivery operation. They deliver within three to five miles of the restaurant. 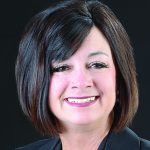 Lucas joined the bank in April and is responsible for the administration, growth, and efficient operation of the bank’s retail network, including oversight of the bank’s 14 branches in Saratoga and Warren counties.

Prior to joining Adirondack Trust, Lucas’s 30-year career focused on retail banking and management. With more than 14 years of leadership at Fifth Third Bank, she provided direction to 82 financial centers across six regions in eastern Michigan.

During her tenure there, she also played a lead role in retail staff recruitment, hiring, and development.

Lucas earned her bachelor’s degree in business administration from Kaplan University, and a business diploma from the Center for Banking Education.

Kelly, a SUNY Oneonta graduate and Minerva native, has a background in hospitality and sales. He launched his professional career in Chicago at Lettuce Entertain You Restaurant Group and completed a management training program while building knowledge in the food and beverage industry and maintaining relationships with vendors and staff.

Kelly worked as beverage sales representative for Frederick Wildman and Sons, as well as Anheuser-Busch, overseeing extensive accounts throughout the Adirondack Park and Northern Capital Region.

His position involves establishing relationships with regional and national sports and reunion event planners to ensure that Lake George area destination assets are top of mind with decision makers.

Overall, Kelly’s role is to prospect and generate new professional relationships as well as maximize current business in the sports and reunion group business market to achieve booked business and overnight room goals.

When South Glens Falls native Steven Brodt was 5 years old, he had what he would later consider a paranormal experience.

He said while sleeping over at his grandmother’s house, he woke in the middle of the night and saw an old woman sitting at the end of his bed. Ten years later, Brodt saw a picture of his great grandmother for the first time and surmised she was the woman he saw when he was 5.

“I can still picture her to this day. It was very clear and very real. As I got older, I became very interested in how it was possible that I saw what I saw,” he said.

The SBA is currently recruiting small business applicants who have been in business for at least three years; who have annual revenues of at least $250,000; who have at least one employee other than the owner; and who can commit to participating in the six-month program from July 5 to Dec. 16.

“T.H.R.I.V.E. is a unique SBA program that can be instrumental for entrepreneurs aiming to grow or expand their small businesses. Throughout the course, participants will receive core business knowledge, work directly with a business coach, meet with peers and develop a three-year Strategic Growth Plan,” said SBA Upstate New York District Director Bernard J. Paprocki. “We will select 20 participants for the Upstate New York cohort, and I strongly encourage small business owners who are ready for growth to consider applying for this opportunity by the May 31 deadline.”

Small business owners can learn more regarding eligibility, how to apply, program format, and locations by visiting www.sbathrive.com.

“T.H.R.I.V.E. Emerging Leaders Reimagined initiative will provide up-and-coming small business leaders with tools, knowledge, and access to the best and the brightest minds in economic development to help them accelerate their growth and help them become competitive in an increasingly global economy,” said Isabella Casillas Guzman, head of the U.S. Small Business Administration (SBA). 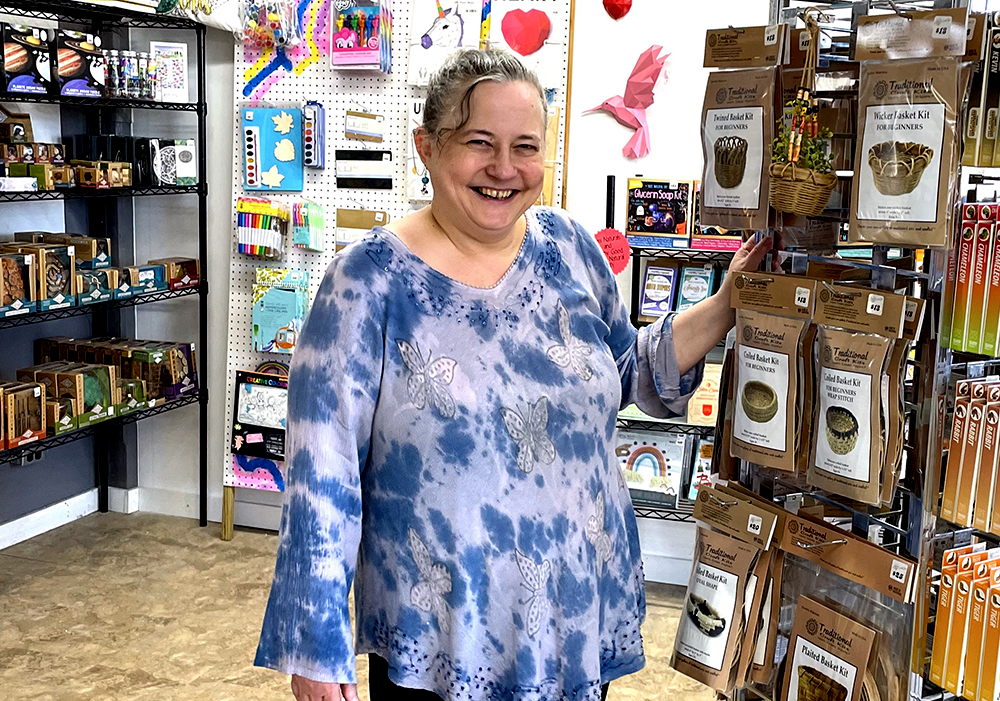 Moving into Suite 101B at The Shirt Factory, 71 Lawrence St., Glens Falls,  is enabling the owner of The Creative Chameleon, Cie McCullough, to expand her offerings of unique games and crafts for young people.

“I love this building,” said McCullough, sole proprietor since 2018. “The owner does so much for us.”

Going from 500 to nearly 900 square feet gives McCullough more room to add retail products, some of which are from different parts of the world, she said.

The shop has a wide assortment of do-it-yourself offerings for the creative child, puzzles, yarn and paper crafts, paintable ceramics and magnets, wood and wicker crafts, plus playing cards, books, journals, and many more items and activities, she said.

“Our biggest sellers are UGears and Eugy craft kits,” she said. “To my knowledge no one else in the area stocks these kits. The ‘U’ in UGears stands for Ukraine, and the distributor is a Ukrainian man who was looking for toys for his own kids. UGears are in a category all their own.”

Northern Insuring Agency Inc. has expanded its presence in and commitment to Glens Falls and north country communities by moving offices to 21 Bay St.

The Adirondack Regional Chamber of Commerce held a ribbon cutting event at the new office on Tuesday, May 17.

Doubling the space from the former suite at 136 Glen St. will enable the agency to add staff, provide a comfortable conference space, and attract more people traveling in and out of the city, Deena Giltz McCullough, CEO, said from the company’s headquarters office in Plattsburgh. There is a another satellite in Potsdam.

In its 90-plus years, Northern Insuring has had many offices in smaller communities but moved strategically into select communities with higher populations and economic growth potential, McCullough said.

“We thought when we came into Glens Falls from Massena that the traffic circle would be a high visibility location,” she said.