The Hacker Boat Co. is in the process of relocating its operations to 315 Corinth Road, Queensbury, just west of Northway Exit 18.

Officials said the corporate offices are already  in the new location. The production and restoration operations will move later in the  spring.

The company plans to eventually add a showroom and ships store on the site.

Roughly $3 million is being invested in the move to the 6.4-acre Queensbury site.

George Badcock, president/CEO, said the  move “will benefit our employees and existing and prospective customers. The majority of our employees will have a much shorter commute, and we believe the new location will better enable us to attract new employees. The more convenient location will make it easier for prospective customers to view and discuss purchasing a Hacker-Craft.”

The new facility is 40 percent larger. It will allow the company to increase production of new boats for anticipated new markets in Europe and the Middle East, as well as expanding restoration operations.

The company also announced Tome’s Landing Marina in Port Deposit, Md., is now an official dealer for the Hacker-Craft brand.

After a full year closed to the public, The Great Escape & Hurricane Harbor is set to reopen this spring for the 2021 season.

The Lake George theme park, which was not given government approval to open in 2020 due to the COVID-19 pandemic, is scheduled to return this year promising a safe environment, officials said.

The Great Escape will be open weekends and select dates starting May 1, with daily operation beginning June 24. In February, the state announced outdoor amusement parks can open—with a third of their normal capacity—by April 9.

“We are ready to welcome our guests back to The Great Escape,” Six Flags Great Escape Resort park president Rebecca Wood said in a press release. “The health and safety of our guests, team members, and community remains our top priority and we are implementing extensive sanitization and safety measures to deliver a safe and entertaining experience for our guests.”

Opening weekend will mark the debut of a new  ride called Adirondack Outlaw, which was originally scheduled to open last year.

Once open, The Great Escape will be operating under state and local guidelines for crowd capacity limits.

The park has established attendance caps that will be well below the park’s theoretical capacity in order to allow for proper social distancing.

Bennington Furniture & Mattress, which has a Queensbury location, has acquired Old Brick Furniture + Mattress Co., expanding its footprint in the Capital Region.

Michael Fiacco, owner and president of Bennington Furniture, purchased the property from former owner Henry Turk. Fiacco and Turk had known each other for many years, and had talked casually of a buyout when Turk was ready to retire, he said. Turk reached out to Fiacco in January of 2019.

Bennington Furniture was started by Fiacco’s mother. The flagship store is located in Bennington. The Old Brick Furniture Co. began in 1960s as a furniture wholesaler under the name C. and D. Distributors.

Bennington Furniture is transitioning its branding to Old Brick Furniture + Mattress Co., a process that is complete for all stores except  Manchester and Vermont. The branding transition for those stores will be complete by the end of March, Fiacco said.

The board of directors of EDC Warren County has made Jim Siplon its permanent president and CEO.

Siplon was serving as a member of the EDC board of directors last July, when longtime CEO  Edward M. Bartholomew died unexpectedly. He offered to step in as the organization’s interim leader, having recently retired as chief operating officer of JUST Water.

“Seven months ago, we recognized Jim as a colleague, strategist and advocate for economic growth. Since July, our board has seen firsthand how he energizes people, marshalls resources and catalyzes progress through public-private partnerships,’’ said Matthew Fuller, chair of the EDC board. “Our board concluded that we are fortunate to have in Jim Siplon a uniquely talented and insightful individual leading our economic development efforts at a moment of particular challenge and emerging opportunity.’’

Under his leadership, EDC has collaborated with the Regional Office of Sustainable Tourism on research to assess interest among professionals in relocating to the Warren County Lake George area and the Adirondack region. He has also overseen updates to the EDC website, including a blog featuring success stories of investing and professional relocation. HE has led expansion of social media, including creating a Facebook page, an Instagram page and a LinkedIn page for improved communications and marketing.

Based in the Salem Office, Gilligan will assume the duties of guiding clients through the mortgage application process.

She has more than 25 years of experience in banking and residential mortgage lending.

Gilligan currently serves as president for the Hoosick Falls Kiwanis Club and is a foundation board member for The Center for Nursing and Rehabilitation in Hoosick Falls.

Wilkins holds a New York State Insurance Agents’ license and has been an active member of the local insurance community for over seven years, acting as both a commercial and personal lines account manager.

She has earned her certified insurance service representative (CISR) designation and is a licensed notary public.

Mrs. Wilkins has three children and lives in Whitehall with her husband.

The Spa Studio Adirondacks LLC has relocated to 420 Quaker Road in Queensbury, in a storefront of the building owned and occupied by Heber Travel.

Owner Erica Keays said the move “has been wildly successful.”

The COVID-19 pandemic caused Keays and her mother Sharon, co-owner, to rethink the spa they had started together in 2006. They decided to shut down two days before the state mandate that non-essential businesses like spas, salons and stylists close.

“Over the years we really grew and at one point the spa included a full hair salon,” she said. “We’ve moved before. But now it was time to downsize, help my mother transition to a quieter role, and take over the whole business.”

Keays is a licensed therapist and her mother, an aesthetician. The spa offers massage therapies, skin care facials and waxing services. Her sister, a nail technician, was brought in 10 years ago, so Keays calls the studio  “a family business.”

When the shutdown began, Keays wondered how they could offer hands-on services and comply with state guidelines.

NYRA said the meet will feature 76 stakes races, worth $21.5 million in total purses. The summer meet will conclude on Monday, Sept. 6.

In February, Gov. Andrew M. Cuomo announced that live sports and entertainment venues with a minimum reserved seating capacity of 10,000 will be permitted to re-open to a limited number of spectators beginning on Feb. 23, with approval from the state Department of Health.

All attendees must present a negative COVID-19 PCR test taken within 72 hours of the event and adhere to health and safety requirements, including mandatory facial coverings and social distancing.

NYRA will continue to closely monitor state-issued regulations to determine how they impact Saratoga Race Course, officials said. Additional details on fan attendance and tickets for the 2021 summer meet will be provided as it becomes available.

The 2021 summer meet, which will offer at least one stakes race every live racing day, will be highlighted by the 152nd renewal of the Grade 1, $1.25 million Travers on Aug. 28 and the Grade 1, $1 million Whitney on Aug. 7, as the anchors of two of the most prestigious racing days in North America.

The Saratoga meet will also include the Grade 1, $1 million Jockey Club Gold Cup and the Grade 1, $600,000 Flower Bowl, both previously run during the fall meet at Belmont Park.

Paula and Michael Freed of Grand Rapids, Mich., have committed to donating major funds toward the creation of the Granville Community Foundation fund (GCF) at the Glens Falls Foundation.

The Freeds, both of whom are originally from Granville, made a $250,000 donation in December to create the foundation. They have announced a challenge for 2021, whereby they will match 50 percent of every donation made during the year, up to an additional $250,000.

“We know it will be a stretch, but we hope to reach a goal of $1 million for the GCF by the end of 2021. While we’re making sure that anyone who wants to donate can make a donation, we’re particularly hopeful that the GCF will provide a vehicle for those of us who have a special connection to Granville, but no longer live there, to help in some way. We may not be able to donate our time or talent, but we can at least donate money,” said Michael Freed.

The goal of the foundation is to evaluate local needs and opportunities and to fund projects that address broad areas of community development, education, art and culture, environment, health or social needs.

The GCF, which will be a donor-advised sub fund of the Glens Falls Foundation, will have an advisory board of seven members, whose primary responsibilities will be to raise money  and to recommend grants to the Glens Falls for approval. 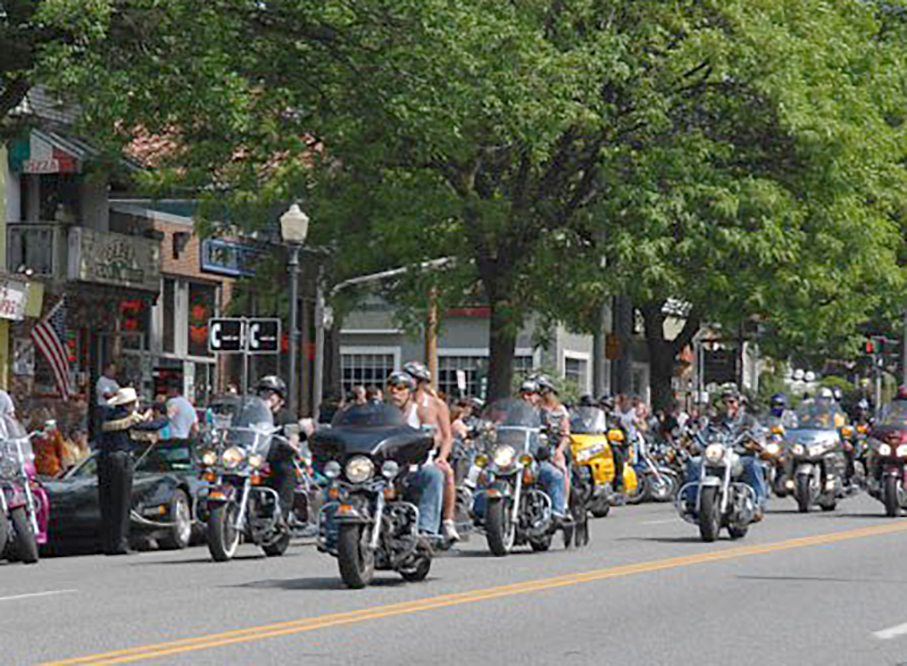 Organizers of Americade say they are optimistic that the 38th annual motorcycle rally will be held in the Lake George area on Sept. 21-25.

Americade last year was schedule for June, then postponed until July because of the coronavirus pandemic. Ultimately, it was  canceled, compelling organizers to carefully consider all safety measures put in place by state and federal health agencies while still offering attendees a true Americade experience.

Those precautions are still at the forefront of planning for 2021, Dutcher said.

The annual rally will be held between Sept. 21 and Sept. 25 over concerns that an event of such magnitude would not be allowed to take place in June as the state’s vaccine rollout continues to progress slowly and limits on large gatherings remain in place.

“We want to make 100 percent sure that a 2021 Americade will happen, but we’re not confident an event of this size will be permissible in June,” Dutcher, said. “But, moving it to September gives us a very high likelihood of it happening.”

Curtis Lumber announced the acquisition of Wiley Brothers at 1854 Route 40 in Schaghticoke.

Wiley Brothers has been a family-owned lumber yard and home improvement store for 75 years.

Adding this new location brings the number of Curtis Lumber Co. locations to 23, all of which are independent, family-owned, full-service home centers and building supply yards.

Officials said moving forward, the store location will carry Curtis Lumber’s premium products, superior hardware assortment, and be staffed with the expertise to cater to both builders and homeowners.

Curtis Lumber has long served the area with delivery service from nearby stores and this acquisition will serve to increase delivery and product availability to more of Rensselaer county.