Few things warm my heart more than a trip to the Lake George outlets.

Some might say cheap, others prefer “financially thoughtful,” but no matter what you call it I like finding a good deal. No doubt many of you feel the same way. Think for a moment about a purchase you’ve been considering recently.

If this item were to become available for 79 percent less than its historical price how excited would that make you? That’s an amazing value. People line up hours in advance for Black Friday deals less great than this. But before you take out your wallet, what if at this exact same time last month the item could be had for 85 percent off. Given that the discount has shrunk, is it still attractive today? Of course, it’s a no brainer.

Freddie Mac’s weekly lender survey found the average 30 year fixed rate mortgage  closed out the month of March at 4.67 percent, a sizable jump from the sub 3 percent we were seeing as recently as November.

For anyone that’s been eyeing a home purchase or refinance it’s easy to think “I’ve dropped the ball here, rates are just way too high now”. With a short term perspective you wouldn’t be wrong. However if you were to line up the average rate for every single week over the past 50 years, rates are lower today than they’ve been for almost 80 percent of those data points since 1971. 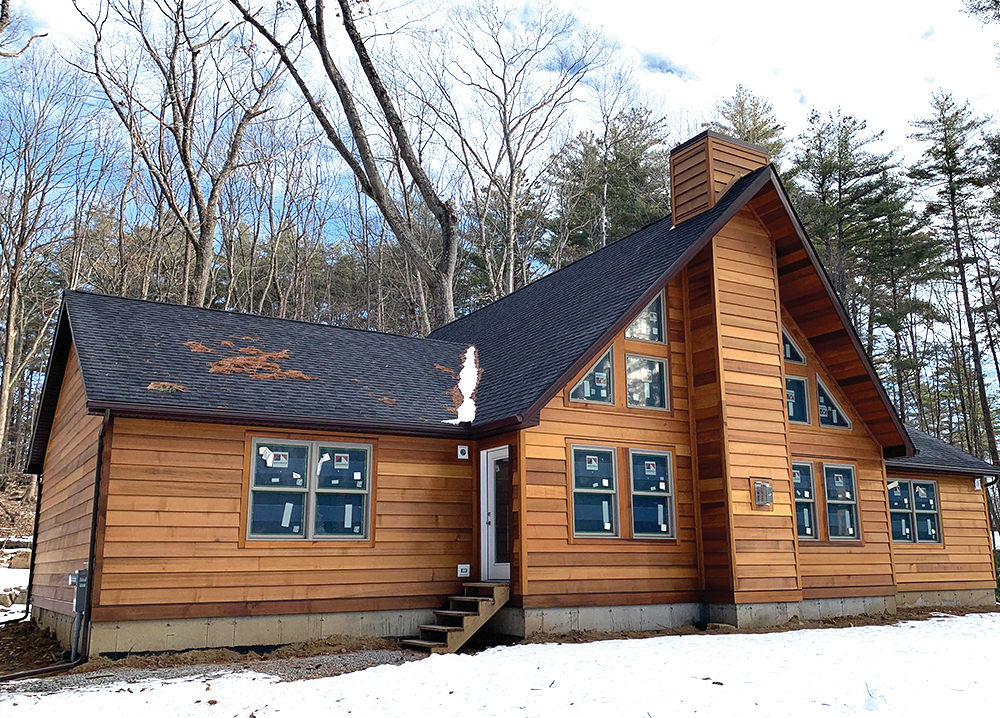 As demand for new homes surges throughout the country, supply shortages and price increases continue to plague the construction industry. According to the National Association of Homebuilders (NAHB), more than 90 percent  of builders experienced materials shortages and delays in 2021.

Builders were encouraged when lumber prices began to fall after a record high in May of 2021, but prices began to climb again in December. The average cost of lumber is now about three times more than it was before the pandemic, industry officials say.

Economists predicted that supply chain shortages and material costs would begin to ease, but that was before Russia invaded Ukraine. Experts say the war in Ukraine will disrupt supply chains and further exacerbate shortages and price increases. The increase in oil and gas prices that have resulted from Russian sanctions will also impact production and transportation costs.

According to Cecil Provost, owner of Saratoga Construction and Saratoga Modular Homes, increased material costs have caused the average home price to skyrocket.

His companies build custom “stick-built” homes as well as custom modular homes. Stick-built homes are constructed on the job site, whereas modular homes are built in sections at a factory.

“The purpose of buying these properties is to maintain them as 1950s-style resorts with modern amenities in excellent condition and quality,” Drake said. “Instead of tearing down and replacing these places with condominiums, townhouses or a $7 million lake home, I see it as my job to maintain this tradition so people have a place to go that’s reasonable, affordable, quality, but fun for the kids and adults offering amenities like shuffleboard—which you don’t see much anymore—or a nice pool deck under the trees, fire pits and barbecues. It’s the outdoor Adirondack-style vacation.”

He purchased Cramer’s Point from Francis and Marion Sause, who owned the business for nearly 30 years.

He owns a Watervliet-based construction firm, CornerStone Building Corp., and Empire Real Estate Management, which specializes in long-term apartment rentals at sites such as Remsen Place, a four-story residential, office and retail building that opened two years ago in Cohoes.

Drake learned that Cramer’s Point was for sale last year, but the timing wasn’t right. Then things changed.

“And now with the experience of renovating the (Adirondack Diamond point Lodge)  I could tell this property offered value,” he said. “It needed upgrading, but less in terms of expense. Time is money as well as money is money. Looking at this project we felt we could do something similar with less upfront costs and time. That’s why we decided to pursue it.”

Cramer’s Point Motel & Cottages has a seven-bedroom home, 10 seasonal cottages, eight motel rooms and two suites. It is about a mile south of Adirondack Diamond Point Lodge. The two resorts are similar in size, but offer different amenities. Cramer’s Point has two pools and beach access.

Drake spent considerable time in Warren and Essex counties, pursuing year-round outdoor activities, while growing up in Clifton Park. He first learned about Adirondack Diamond Point Lodge about 20 years ago. Last year, he saw an opportunity that was too good to pass up, he said.

That property has seven cabins plus the 16-room main lodge.

“We closed on it in mid-April 2021 and really had to put things in high gear to be open for Memorial Day,” he said. “It was neglected for many years. We spent a considerable sum of money replacing all the furniture, a lot of the flooring and did the whole exterior over again, everything from windows, doors and roofs to top-level lawn furniture.”

In addition, all housekeeping material such linen and bedding was tossed out and replaced,  Drake said. “But we kept it in the price point of expectations for a mom-and-pop resort. It was very well-received by guests. We did a considerable amount of business over what the previous owners did. We also enjoyed very good feedback and return rate for people coming back last fall or this summer.”

The job got done despite difficulty obtaining materials and supplies caused by COVID-19, and an ongoing statewide and nationwide labor shortage problem.

“We brought the marketing to a modern level with a strong website and reservation system that was very user-friendly and interactive,” Drake said. “But what really mattered was the service. We took time with each customer, telling them how we could best accommodate their party, group or event. You don’t see that today with 1-800 systems.”

“By bringing the quality up, I think we attracted a new audience that was looking for quality, which made a difference. That said, we did have a lot of returners who had reserved from prior years. Their reaction was nothing short of astonishment,” he said.

When the COVID-19 pandemic shut down many offices throughout the country, Glens Falls-based Plant Doctor lost half of its commercial clients. The interior and exterior plant design service company has customers throughout the greater Capital Region and Lake George.

But many of Plant Doctor’s previous corporate clients are re-enlisting her services as they transition their staff back into their offices.

“Most all of my business is commercial—a lot of law offices,” said owner Lanette Akerson. “The lawyers are, by and large, working from home and I lost half of them. Half of them still retain our services even though the offices are half-manned or not manned at all.”

It was in the midst of this significant downturn in business that The Desmond Hotel in Albany reached out to Akerson and asked her to design the landscaping for the hotel’s two atriums. The $75,000 project was the largest project in her more than 20 years at Plant Doctor.

“It was a huge project. We worked on it together and came out with an amazing result,” she said.

As a result of that project, Akerson’s gross revenue for 2020 equaled that of 2019. Her net revenue was also positively impacted after she made the decision to significantly reduce her expenses.

Sengsoulavong will administer the association’s operations including its financial management, governance, and member services. He will also collaboratively engage with elected officials, community leaders and other stakeholders on behalf of Southern Adirondack Realtors.

The hiring follows the retirement of Luisa Craige-Sherman, who led SAR affairs going back to 2015.

“We look forward to having Densay join us as our association grows over the coming years. His vast experience will help ensure SAR and its members continue serving the community and their clients through ever changing times,” said McDonough, emphasizing the association and real estate industry’s anticipated growth.

“Realtors are woven into the fabric of the community, and a vibrant housing market is the foundation for achieving great quality of place. It’s only fitting that SAR be engaged in the public conversation and its members be thought leaders,” said Sengsoulavong. “I admire the Southern Adirondacks Realtors commitment to the community. They demonstrate that for a region to grow and prosper, purposeful collaboration is needed, and I am excited to join those efforts.”

Alyssa Hackett opened Wolf Hollow Home Inspection last year and is certified to perform both home and mold inspections and works in numerous counties including Albany, Saratoga, Warren, and Washington.

She is willing to travel within a 1.5 hour radius of Albany.

Just six months after graduating from high school in 2001, Hackett enlisted in the Navy. She had no intention of entering the military but felt a call to serve after the 9/11 terrorist attacks. A few months later, she deployed to the Middle East aboard the aircraft carrier USS John F. Kennedy.

After serving, she returned home and worked at a variety of different jobs before earning a degree in social work from the College of Saint Rose.

Local real estate agents and brokers have been forced to change the way they do business in the midst of the COVID-19 pandemic.

Until this month, the work of real estate agents was considered non-essential, creating a severe hardship. This month, that was relaxed somewhat, but challenges still exist.

New York state opened up part of the real estate market on April 1 with a the ruling that residential and commercial showings and some other limited functions are essential businesses and can continue.

By Jill Nagy
Today’s home inspectors have access to an array of technological assistants: thermal imaging cameras, radon cans, gas detectors and computer software to help put their findings into an illustrated report.
However, “the two things I use most are a flashlight and a screwdriver,” said Mike Feeder of Assured Home Inspections in Hudson Falls. Feeder does inspections in Saratoga County and the North Country. He works out of his home.
“I have a home in my office,” said Jolene Lomnes of Informative Home Inspections in South Glens Falls. She meets clients at the inspection site and will travel anywhere within 100 miles or so of the home base.

By Jill Nagy
Glen Street Associates recently purchased the former American Red Cross building at 74 Warren St. in Glens Falls, its 14th real estate purchase since 2001.
The building has been vacant since the Red Cross moved to smaller quarters. Peter Hoffman, one of the principals in Glen Street Associates (the other is his wife, Suzanne), said they have not yet decided what to do with the building but, before they decide, he will consult with the North Glens Falls IDA. “We always start there.”
“It is kind of a plain Jane right now, but it is a brick building with some 1940s charm and character,” he said.

By Susan E. Campbell
A group of four Capital District real estate agents is offering personal safety awareness instruction specifically designed for real estate agents—but with a kick.
The idea for Personal Safety Services started to take root about two years ago when Bruce McClellan, a recently retired Realtor and founder of Pinnacle Realty Saratoga LLC, had a minor health setback that “caused him to pull away a bit” from his busy real estate practice, according to the group’s operations director and instructor, Genevieve Suguitan of Signature One Group Malta.