By Lisa Balschunat
Six years ago, Cristina Hanchett took a chance on a small South Street storefront to open her business, the Juicin’ Jar.
The menu was packed with healthy blender and juice drinks, wraps, salad and what has become the establishment’s famous waffles.
“When we opened in Glens Falls we also had a place in Lake George,” Hanchett said. “Things were happening downtown and we wanted to be a part of it.”
In 2016, the Juicin’ Jar moved into the small café space within Milk and Honey, 16 Exchange St., and most recently absorbed the inventory and first floor of the previous gift shop that closed.
“We will continue to offer some items that Milk and Honey carried, like the local honey, teas, bath soaps, lotions and greeting cards,” she said. 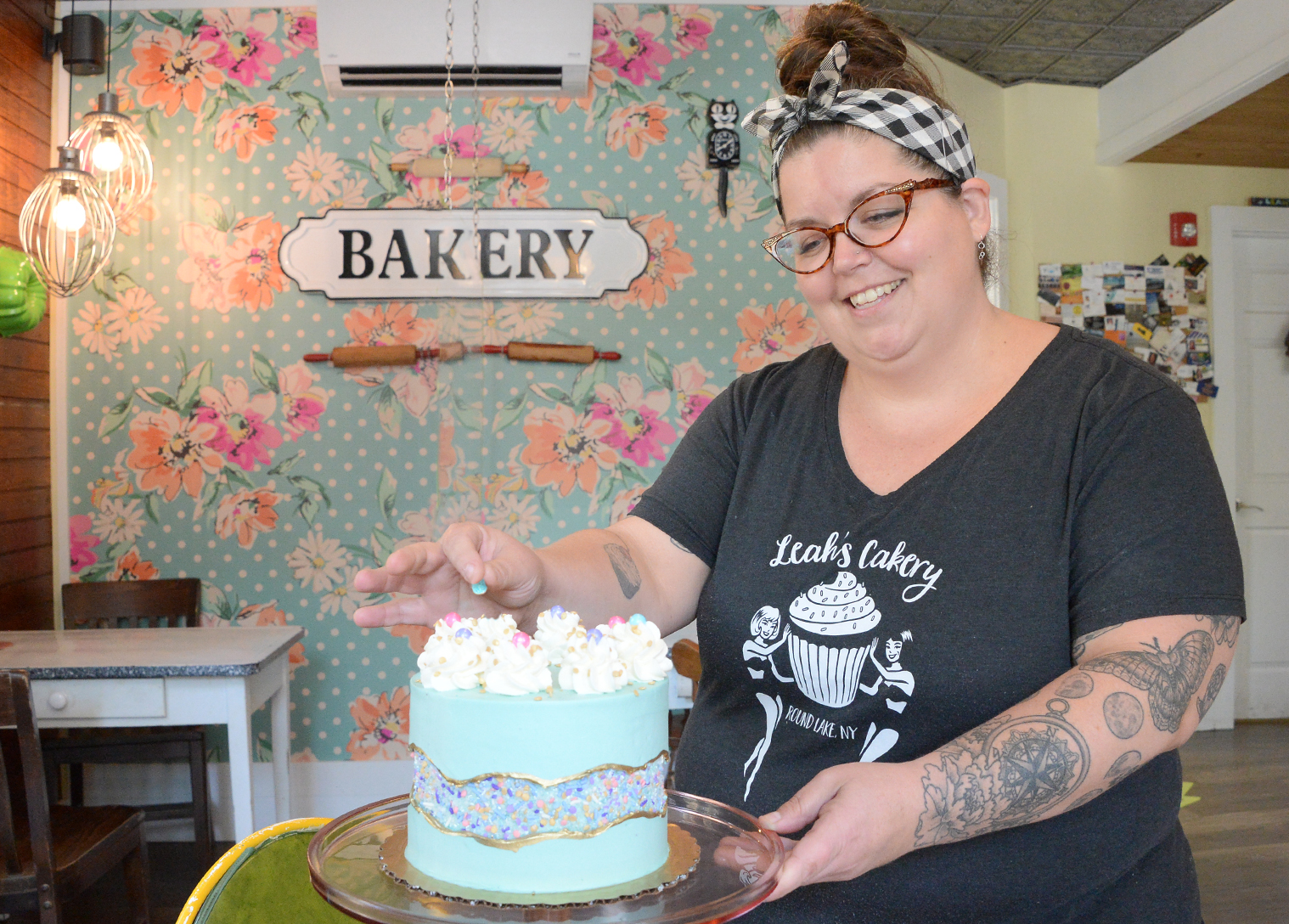 By Christine Graf
Lake George native Leah Stein worked in the area as a park ranger and environmental educator. She then shifted gears and worked at a bakery in the area. In 2013, she decided to go out on her own.
“I grew up in a tourist town with tons of entrepreneurs around me,” she said. “A lot of people had their own businesses, and it was always something that was in the back of mind as an attainable goal.”
She opened Leah’s Cakery, located in the historic West Side General Store building at 3 Curry Street in Round Lake, in 2013.
When Stein made the decision to change professions, she enrolled in the culinary program at Schenectady County Community College (SCCC). She comes from what she describes as a “culinary inspired” family, and she fell in love with baking as a young girl. It was while making custom cakes as a side job while working in environmental science that she decided to pursue baking full time.
While still in culinary school, Stein worked part-time making custom cakes at the former Queen of Tarts bakery in Guilderland. After graduating from SCCC 2008, she taught baking courses at the college for six years.

By Christine Graf
It’s been more than 40 years since Marj DeVit and her husband, Marty, opened their heating and air conditioning business. The Glens Falls company, Thermal Associates, was a pioneer in air source heat pump technology during the energy crisis in the 1970s and 1980s.
During the 1980s, Thermal Associates was one of the first companies to introduce geothermal heat pump technology to the region.
Geothermal heat pumps can heat, cool, and supply hot water to a home by transferring heat to or from the ground. According to the U.S. Department of Energy, the use of geothermal technology can reduce energy bills by up to 65 percent compared to traditional HVAC units. Because geothermal heat pumps require no fossil fuels to operate, they emit significantly less CO2 than traditional units. Approximately 40 percent of U.S. CO2 emissions result from the demand for heating, cooling, and hot water.
In the early years of the business, DeVit worked from home handling phone calls, scheduling service calls, and performing accounting tasks.

By Jennifer Farnsworth
Sweet Beet Bistro, which closed its business in Greenwich, plans to re-open at a spot in Glens Falls in the spring.
According to bistro owner Johanna von Geldern, they are looking to re-open by Mother’s Day at the latest.
Von Geldern has found a way to create a bistro that values farm-to-table food and the community where it is grown. It’s a concept that she says she learned on the job . She is excited to bring it to her new location next year.
When COVID-19 hit in March, von Geldern said they closed their doors in Greenwich. With capacity limited to 50 percent and without outdoor seating, she said the business could not have survived. She then decided it was time to relocate in order to keep the business going.
In Glens Falls, she said, the new space will be slightly larger with its own bar area, a separate dining room and extensive patio space.

by Andrea Palmer
Prior to opening Fresh ADK, a restaurant at 11 South St. in Glens Falls, Melissa Brennan owned and operated daycare centers for 21 years. In 2015, she became sick and gained weight.
It led to starting a business that pays attention to healthy eating.
“My body started to shut down, and I didn’t know why. So I left the daycare business. I literally thought I was dying,” said Brennan.
“I found out it was all food-related. I took time to figure out myself what was wrong, because there wasn’t a doctor who could tell me. I’d always wanted to try something new, and I knew there were other people like me who had food-related sickness. So I opened the restaurant,” she said.
Brennan chose to operate the business almost entirely by herself.

By Rachel Phillips
In a digital world of iPhones and social media, one local woman started a business to help people connect “the old-fashioned way.”
Briana Lyons started The Yellow Note in 2013 as a small Etsy shop that sold stationery and custom address stamps. Though rewarding, her career in social work had left her lacking a creative outlet, inspiring her to open her store.
As a means of promoting her products, she created an Instagram account where she shared photos of her family and lifestyle along with her products. To her surprise, her photography became popular, and The Yellow Note, located out of Lyons’ home in Glens Falls, has since evolved into a multi-faceted business and studio.

The utilization rate for Minority and Women-Owned Business Enterprises (MWBE) on state contracts increased to 29.13 percent during the 2018-2019 fiscal year, achieving the highest rate in the nation, state officials said.
In total, MWBEs won more than $2.93 billion in state contracts during the 2018-2019 fiscal year, officials said.
“In New York, we know that diversity is a strength, not a weakness. And when we empower minority and women-owned businesses to compete for state contracts, we create a better New York for all,” Gov. Andrew Cuomo said. “Our nation-leading utilization rate reflects the unmatched pool of MWBEs in the Empire State and our concerted efforts to create a more equal playing field for these companies.”
“We are breaking down barriers for aspiring entrepreneurs and providing opportunities to ensure the growth and success of minority and women owned businesses,” said Lt. Gov. Kathy Hochul. “The renewal and expansion of our robust MWBE program is advancing New York’s nation-leading MWBE goals, with the utilization rate climbing to 29.13 percent. We are committed to encouraging and supporting minority and women owned businesses across the state, creating jobs and strengthening the economy as part of our overall efforts to promote diversity.”

Growing up, Rachel Dutra, co-owner of Rachel’s Café and Spice Co.,  resisted the entrepreneurial urge that seems to run in her family’s DNA. Her grandfather opened Castaway Marina after serving in the U.S. Navy. Her father also started his own business, with the family eventually opening and operating the East End Eatery in Glens Falls until they retired about a year ago.

“I always said I wasn’t going to go the entrepreneur route. I intended to do the ‘safe’ thing. But I was just really born to run my own business,” said Dutra.

Rachel and her husband, Dave Dutra, opened Rachel’s Café and Spice Co. in September at the site of the now closed East End Eatery 240 Warren St. Her background includes a master’s degree in education and teaching. Her husband was involved in the amusement park industry, working for Charles Wood and eventually working in the food operations at the Great Escape for about 12 years.

When her family asked her to come back seven years ago to help out at East End Eatery, Dutra cautioned them that it would only be temporary. “But here I am, seven years later,” she said. Within six months, she had helped double the business and made some big changes.

NEPROMO is a locally owned promotional products company that has the distinction of being operated by four people who have been friends and business partners since their college days in the 1990s.

Deana Endieveri, managing partner, and her friend Kindra Chamberlain, had one table-top printer back then and sold silk-screened T-shirts dorm-to-dorm. Now the two women, along with their co-owning husbands, Mike and Jim, have seven embroidery machines and five screen printers Production takes up the entire former Coca Cola bottling plant at 95 Main St. in South Glens Falls.

NEPROMO is a company that will put a name or logo on just about anything to help build that client’s brand, as long as the product has been tested to be safe, lead-free and ethically made.

“Never did I think I was going to own a business and be a managing partner,“ said Endieveri. “Things just happened in this collective of ours.”

Endieveri was a communications major in college and heading to be a journalist, she said. But when she was exposed to a friend’s business she realized “we had something in front of us that had potential.”