A Warrensburg car dealership is planning an early summer move into a spacious new facility, nearly triple the size of its current home.

Krystal Chrysler Jeep Dodge is relocating from a less than 8,000-square-foot site at 4488 Route 9, to a 21,000-square-foot building 2.5 miles closer to the village, adjacent to Oscar’s Smokehouse, one of the North Country’s most popular retail stores.

Owner Steve Lofrgren said the move is necessitated by business growth spurred by the popularity of the Ram and Jeep brands, and the need for larger service capacity.

There are several other Chrysler Jeep Dodge dealerships in the region including Nemer, in Queensbury, but Lofgren said the new Warrensburg site will have unique features such as a Jeep-only showroom.

“We would be the only one north of Albany with this type of facility,” he said.

When facing the building, the Jeep showroom will take center stage in the middle. A separate showroom for Chrysler and Dodge vehicles will be on the left, with service to the right on the south end of the structure.

Stewart’s Shops is pursuing another year of aggressive capital projects by putting stores in seven new markets, and replacing older facilities with large new buildings at 13 other sites including one on Broad Street in Glens Falls.

This comes on the heels of $50 million the Saratoga Springs-based company spent last year for construction on 18 shops, of which 12 were replacements, the company said.

The other six previously belonged to the Central New York-based Blueox Neighborhood Market convenience store chain, which Stewart’s purchased and rebranded as its own.

But retail shop upgrades are only one part of the company’s capital program. “We are continuing to invest in our manufacturing facility in Greenfield,” spokesperson Erica Komoroske said. “We recently completed a 54,000-square-foot dry warehouse expansion project and we are currently expanding our deli cooler to address our ever growing customer demand for expanded food-to-go options.”

Founded in 1945, Stewart’s is among the Top 25 convenience store chains in America with 354 shops across 32 counties in New York and Vermont. Its territory stretches from Canton near the Canadian border, west to Oswego County, south to Orange County in the lower Hudson Valley, and east to Rutland, Vt.

The firm employs about 5,000 people, 4,400 in shops and 600 between its manufacturing and administrative departments, according to the company.

Construction employment in December remained below levels reached just before the start of the pandemic in more than half the states as firms struggled to find enough workers to hire, according to a new analysis of federal employment data released by the Associated General Contractors of America.

But the Biden Administration’s decision today to withdraw its emergency vaccine mandate for firms that employ 100 or more people will help firms avoid losing workers unwilling to comply with the new measure, officials said.

The decision by the Occupational Safety & Health Administration to withdraw its emergency temporary standard requiring workers at firms that employ 100 or more people to be vaccinated or tested weekly comes after the Supreme Court signaled its strong support for legal challenges filed by the Associated General Contractors of America and other entities against the measure.

The association challenged the rule late last year noting that the measure was unlawful and would do little to boost vaccination rates among construction workers, citing the fact that 64 percent of the construction industry works for firms that employ 99 or fewer people. With nearly 90 percent of construction firms having a hard time finding workers to hire, the rule would simply have encouraged vaccine-hesitant workers to move to smaller firms.

“The Biden administration is right to abandon its misguided vaccine emergency rule and we encourage them to do the same with a similar measure affecting federal contractors that we are also challenging in court,” said Stephen E. Sandherr, the association’s chief executive officer. “At the same time, we will continue to work with the administration to ensure its planned permanent vaccine rule applies only to workers in industries like healthcare that OSHA deems at high risk from the coronavirus.”

By Jennifer Farnsworth
A property with open space in Queensbury is being cleared for the construction of a virtual sports facility.
David Brindle of Luxury Box LLC, developer of the project, said the facility will include seven separate buildings located on Route 9 across from the Fun Spot.
Brindle said the zoning approval came through at the end of January and they are now just waiting for final approval on building permits.
Brindle expects the project to be completed by mid-March if all goes well.
The seven buildings will have virtual golf. It will also give customers options for baseball, darts, soccer, hockey, hunting and more. The golf simulators also offer much more than the traditional program, said Brindle.
“The technology with these games is so advanced. We have golf simulators in the area but this goes way beyond what we have seen, with a putting simulator and the ability to play many courses,” he said.

By Christine Graf
Economists and industry experts predict that the construction industry will continue to be plagued by rising material costs, material shortages and supply chain disruptions throughout 2021.
Thomas Albrecht Sr., owner of Hilltop Construction in Glens Falls, said his residential and commercial construction company, like so many others, has faced issues with material shortages.
“Expectations of delivery are non-existent,” he said. “My biggest challenge is educating our clients that you can have contracts and you can set dates, but we can’t necessary meet them because of the challenges we are faced with. What you could get in 4 weeks max could now be out 8 to 12 weeks. That means our planning has to be much more extensive.”
Hilltop Construction has 30 employees, many of whom have had to quarantine due to COVID exposure. As a result, the company has to absorb additional labor costs.
“The fallout continues as we see employees being exposed and having to quarantine,” he said. “We, by law, have to pay them up to five days. That’s a revolving door that continues and the financial burden continues.”
“The price increases are pretty drastic,” said Sara Turoczy, manager of business development at MLB Construction Services in Malta. “Along with lumber, we are seeing steel pricing skyrocket.”

By Jill Nagy
There is a $1 million building project planned for the Floyd Bennett Memorial Airport in Queensbury, which is the Warren County airport. Eight new hangars will be constructed.
The project will also result in a new building to house snow removal equipment and one replacing an original structure built in the 1940s.
Work is expected to begin in the spring.
Officials are also applying for a grant to upgrade the runway lights to LED lights.
Plank Construction of Schenectady is the general contractor. That project is budgeted at $993,000, of which the state Department of Transportation will pay 90 percent and Warren County will pay the balance.

By Christine Graf
Renovation and restoration work is underway on the former Red Cross building at 74 Warren St. in Glens Falls.
Glen Street Associates purchased the approximately 5,000-square-foot property for $182,000.
According to Peter Hoffman, president of Glen Street Associates, 74 Warren St. is his company’s first 1940s-era building. In addition to specializing in the restoration of old buildings, the Glens Falls-based company also develops, owns, and operates apartment, commercial, office, and hospitality properties in Warren, Washington, and Saratoga counties.

By Jill Nagy
Adirondack Trust Co. is planning to construct a new branch office at 79 Main St. in Queensbury. It will replace the present branch on Maple Street in Glens Falls.
Construction will begin as soon as the weather allows, according in Charles Wait Jr., executive vice president.
“We are stymied by the weather. It’s not exactly the best weather to be digging,” he said. Once construction can begin, they are “targeting an eight-month schedule.”

By Rachel Phillips
After years of growth, Saratoga Eagle Sales and Service is expanding its Saratoga warehouse.
Saratoga Eagle Sales and Service is a beverage distributor, which delivers products to restaurants, pubs, convenience stores, grocery stores, concert venues and other retailers all over the area.
Currently, they provide service in counties from Albany, Schoharie and Rensselaer all the way up to Franklin County.
Recently, the company acquired Plattsburgh Distributing in Clinton County, prompting the need for more storage space, officials said. The warehouse, located at 45 Duplainville Road in Saratoga Springs, will be expanded 30,000 square feet, and will then encompass a total of 165,000 square feet to help meet increased demand. 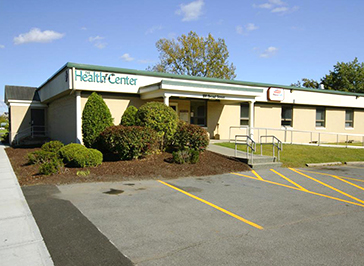