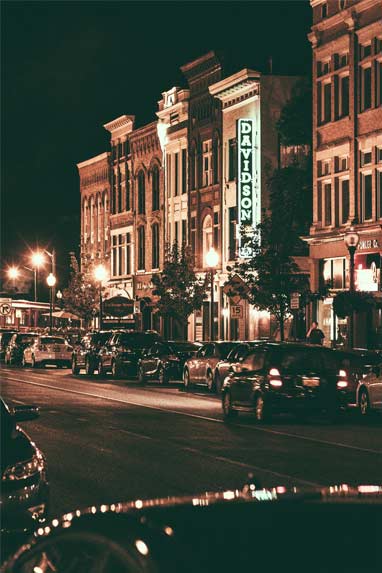 The three-story building at 184 Glen Street was erected in 1865 after the original buildings on the block burned down in the Great Fire of 1864. At that time, its address was actually 126 Glen Street, and the street was renumbered some time later. Originally, the brick building had ornate iron work over the windows, presumably in the Italianate style that was found on many other local buildings at the time. In the early 1900s, the iron was removed and replaced with a simple crown and bricks over the windows in order to lessen the damage the heavy iron had caused to the facade.

One of the building's first tenants was E. Williams, who operated a store called "The Exhange." Exchange Street, which is now part-pedestrian alleyway between that building and the former B.B. Fowler Dry Goods Co., was named for Williams' business. In the years after, a number of different merchants sold goods from the site, with two of the more well-known operations being Coolidge & Lee and Erlanger's Men's and Boy's. There was also a barber shop on the front part of the second floor, and apartments on the third floor.

In 1976, Orsini's Restaurant opened, and was succeeded by J.R. Egan's in 1979. After that, Brandywine's took over the space, and Danahy's Restaurant followed in 1991. Danahy's closed in 1994, and Rick & John Davidson purchased the building two years later.

After extensive renovations, the Davidson brothers opened the first brewery in Warren or Washington County since Prohibition. For the caliber of the work, the project won the Chapman Museum Historic Preservation Award. In 2010, the exterior of the building was renovated in an effort to recreate its original period appearance as much as possible.

When you visit the restaurant & brewery, you can still see the original gaslight lines above the rafters, the original square head nails that secured the ceiling boards, and some of the original knob and tube wiring installed when the building was electrified in the late 1800s.