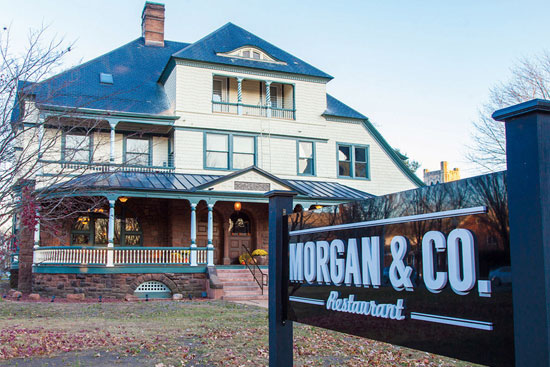 The history of the McEchron House is intertwined with the life of William McEchron, a Schuylerville native. William McEchron was born on August 2, 1831. He worked as a tow boy on the Champlain Canal as a teenager, and afterward, he was a lumberjack in the Adirondacks. In 1858, McEchron married Sarah Carswell.

Five years later, the McEchrons moved to Glens Falls and lived in a brick house located on Elm Street. The couple soon purchased the Lewis Arms house on the corner of Ridge and Maple Street, which was built by Arunah Adsit. Later on, they constructed their new home at 65 Ridge Street, which came to be known as the McEchron House.

During their time in Glens Falls, the McEchrons were recognized as philanthropists, and William McEchron was involved in many local business ventures. He was a charter member of the YMCA, the head of the Glens Falls Paper Company, served as Village President, and was involved in the construction of Christ Church. After his death, his wife and daughters donated money toward the church and the YMCA's pool and gym additions.

Built in 1891, the McEchron House is a 2 1/2 story, asymmetrical building with stone framework. The McEchron House was modeled after both Queen Anne and Romanesque Revival designs. The first story was built out of random ashlar sandstone, and two stone arches were situated at the entrance.

The McEchron family moved into the new house and made it their permanent residence, but after William's death in 1906 and Sarah's death in 1920, the site was used for a completely new purpose.

After Sarah's death, her daughters transferred the deed of the house to the City of Glens Falls. Instead of remaining a home, the McEchron House was used as a Health Center and contained offices for charitable organizations in Glens Falls. The City moved the Health Department from City Hall to the McEchron House in 1921, and over the years, provided basic maintenance to the site.

In 1984, the house was added to the National Register of Historic Places. Unfortunately, the costs of maintenance and renovations were too much for the City to handle, and the last tenant, a Warren County Public Health clinic used for testing and treating STDs and HIV, relocated in December 2009.

However, by 2011, the house had been sold to city attorney Ronald Newell and his partners, John Carr and Michael Laney. The plan was to transform the McEchron House into a restaurant, and that dream became a reality in 2014. Chefs and current co-owners Rebecca Newell-Butters and Steve Butters now run the newly renovated building, named Morgan & Company, which is open for dining, events, and catering.