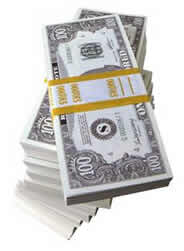 In March 2011, Hilltop Construction Co. of Hudson Falls, NY was renovating the kitchen of an old Queensbury home, which belonged to Jim and Judy Tholl. After opening up an access panel to the old ceiling above the kitchen cabinets, one of Hilltop's workers found a brown paper bag full of money.

"He threw it to another one of the guys and said, 'Here's a bag of money,' just joking around. The other guy opened it and it was, in fact, a bag of money," said Tom Albrecht, president and CEO of Hilltop Construction.

It was Albrecht's son who found the money and brought it back to the Hilltop office to determine what should be done with the newfound treasure. Albrecht immediately determined the money needed to go back to the homeowners.

The homeowners were in shock when Albrecht handed the money to them. They were not only taken aback by the amount of cash they had discovered, but at the amount of integrity Hilltop had shown by returning it to them.

This is the second renovation Hilltop Construction has done for the Tholls, and the Tholls said will likely use the money toward further renovations on their home.