The Sacramento Kings finally come to New York City tonight to play against the New York Knicks at Madison Square Garden. This is a game that many locals have been waiting for, ever since Jimmer Fredette was chosen 10th overall in the 2011 NBA draft last June.

Tickets for the game went fast (only available on StubHub now) as native New Yorkers are anxious to see their hometown hero Fredette play in NYC. However, as of last week there is a new star in town by the name of Jeremy Lin. 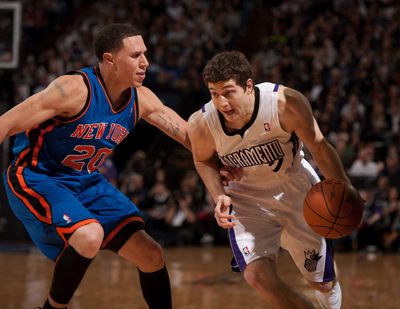 Jeremy Lin has been tearing up the court for the New York Knicks for the last 5 or 6 games, and doesn’t show any signs of slowing down after drilling that three-pointer last night for the comeback win over the Toronto Raptors. Lin had a double-double in the game (27 PTS, 11 AST).

What do you think will happen tonight? The Knicks are looking pretty good lately with Lin leading them on a six game winning streak. The Kings gave up 121 points to the Chicago Bulls last night, and are off to a rough start this season (10-18). Maybe Jimmer Fredette will bring some magic home to New York and shoot the lights out tonight. Who knows? It could happen.

The first time the Knicks and the Kings played this season (Dec. 31 in Sacramento) the Knicks won in blowout fashion, with a final score of 114-92.

Check this out, Jimmer Fredette will be hosting a summer basketball camp for area kids this June! The location of the camp is TBA at the moment, but it will be held somewhere between Saratoga Springs and Glens Falls from June 28 – 30. There will be two sessions, helping kids between the ages of 8 and 18 improve their basketball skills. Jimmer will be running a similar camp in Lehi, Utah in August.

This is your opportunity to learn basketball from an NBA star! For more information, and to register early for Jimmer Jam Basketball Camp, visit jimmerjamcamp.com.