“As
a small 3rd grader, I watched in wonder as boys twice my size competed
at the Glens Falls Civic Center for a basketball championship that would
make them legends in our high school gymnasium for decades to come… 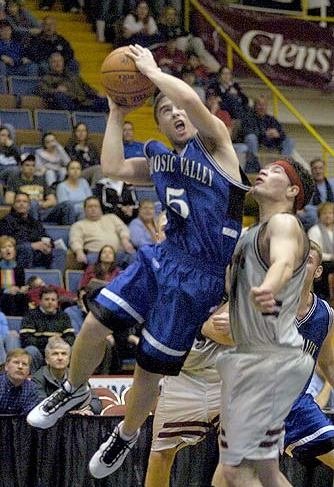 Times Union Photo Used By Permission
Photographer: Phil Kamrass
The
crowd was alive with excitement. Every parent on the edge of their
seat. Every point scored, a stadium of cheers. Every opposing point, an
echo back. Every shot, a chance at glory. These were some of the state’s
most talented young basketball players attempting to fulfill their
dreams.

Even though our home team lost that day, the excitement
awakened something inside of me. It was a craving for that kind of
purpose, to feel like I could have my own chance at making a name for
myself and my Alma mater some day… and I would.

I was 9 years
older, and a couple feet taller. It was my turn. My teammates and I
spent the hour-long bus ride up to Glens Falls laughing on the outside
and praying on the inside. Having become almost as close as brothers, we
knew this could be our very last game together as a team. There was a
lot on the line, but we were ready to give it our all.

Warming
up at the Civic Center, memories of the game I had witnessed as a child
came flooding back. I had made it. Squeaking high tops and cheering fans
faded into the background as we fought for victory. We gave it our all
and wrote the final chapter of our legacy on the court that day. It is a
day I will never forget.”

This is the story of Isaac Cail, a 2005 graduate of Hoosic Valley Central School (2005 NYSPHSAA State Semi-finalist). The NYSPHSAA Boy’s Basketball State Tournament
at the Glens Falls Civic Center had certainly made an impact on him when he was only a boy.

The
game he had witnessed inspired him to one day rise to the challenge,
risking it all, win or lose.

“You never know what kind of impact
it’s going to have on your child,” said Cail. “For me, attending that
one game led me down a road to some of the best friends and the greatest
memories of my life. We advanced to the state semi finals with some
terrific games along the way. And even though we lost, I hope there was
at least one little boy or girl sitting in that stadium watching and now
waiting for their chance. Victory or defeat, inspiring the next
generation to aspire to do great things is a win in my book.”

Cail contributed his story because he wants to encourage parents to take their children to this event.