SUNY Adirondack and its affiliates announced today that construction financing has been secured, officially confirming plans to bring student housing to its Queensbury campus in time for fall semester 2013.

“The addition of on-campus student housing to the Queensbury campus marks another major milestone in SUNY Adirondack’s commitment to increasing access to affordable higher education,” said Dr. Ronald C. Heacock, the college’s President. “With declining high school populations in our service area, on-campus student housing will allow us to maintain current enrollment levels by being able to accommodate residential students from outside our area.” SUNY Adirondack’s Marketing and Admissions office plan to promote the new housing option not only locally, but also in key markets such as Albany, Long Island, northern New Jersey, and Connecticut. 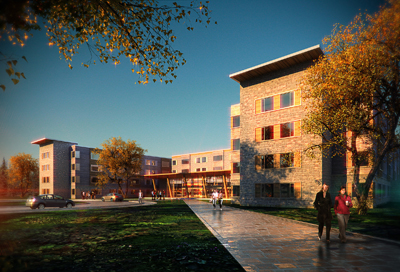 Want to know some more details, and how to apply? Read on..
Construction on the 148,000 square-foot student housing complex will begin this spring. In September, SUNY Adirondack will begin accepting housing applications in conjunction with enrollment applications for the following fall. Later this summer, the college plans to hire a housing director and other staff to help facilitate the transition.

“We feel there is a direct tie between learning outcomes and student housing. By offering housing, we will be in a better position to enhance our residential instruction, athletic, and student life activities, all of which contribute to an integrated learning environment and student success.” – Brian Durant, SUNY Adirondack’s Vice President for Academic and Student Affairs

The Faculty-Student Association (FSA) is working to ensure that the campus will be able to accommodate on-campus living, including enhancements to food service and other necessities.

This student housing project is the second major construction project that SUNY Adirondack has announced in the last year or two. The college is also relocating its Wilton Center to new facility on Route 9.

What are your thoughts? Would you like to live on-campus at SUNY Adirondack? It would be a nice way to get out of the house, and still stay close to home! You might just make some friends from out of the area!