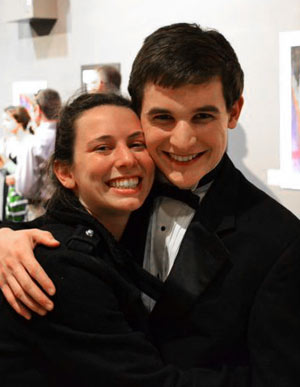 As we mentioned last week, Rising Stars at the Wood is a chance for local high school students who are talented in the areas of performance to put on a great showcase at the Charles R. Wood Theater each spring.

In the following 10 Questions interview, Shimkus shares his experiences as a Rising Star, including the audition process, rehearsals and his relation to other Rising Stars in the show this year.

1. Congratulations on being chosen for Rising Stars at the Wood. How does the selection process work?

Thank you very much! Rising stars has an
audition process much like a professional theater troupe would. First, all candidates
send in an application to Mr. Woodward at the Wood Theater. From there, we had
to prepare two different complete songs that we felt best displayed our singing
as well as stage acting talents. In mid-April, we had a tryout with a board of
judges, consisting of a performance of these two songs and a personal interview
much like one for a job.

2. What school do you attend, and what grade are you in?

I am currently a senior at Glens Falls High
School, and I will be attending SUNY Cortland next year as a Musical Theater
major.

3. Have you ever been to the Charles R. Wood Theatre before? If so, what performances did you catch there?

Actually, my first performance ever was at The
Wood! But other than that, I have seen the occasional ACT children’s
performances as well as the show Jersey Boys at the Theater. Also, I was in the
Rising Stars last year as well. All in all, I have seen and been a part of some
pretty magical moments at The Wood. 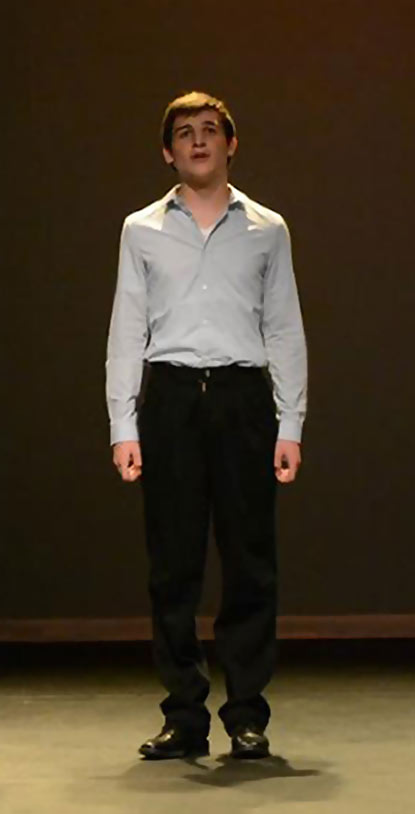 4. What will you be singing or performing at the show? Did you get to choose? If so, what made you choose that song?

The showcase is made up of 3 songs and a medley
sung by all of the Rising Stars as an ensemble, as well as a solo performance
by every person.

I will be singing “Along The Way” from Edges. The judges that
had auditioned us are supposed to choose one of the two songs we sang for the
audition for us to perform in the showcase, so in this sense we had limited
choice in what song we were singing. But, many of us also prepared our songs
individually, so by choosing what to sing for the audition, we also in essence
chose what we will sing in the final performance.

Personally, I chose “Along
the Way” because it displays a very wide range of emotions. Despite the fact
that the song only lasts about 4 minutes, there is a real sense of a character
within it.

5. What is it like preparing for the show? How often do you practice?

We started rehearsing about three weeks ago, and
we still have somewhere in the area of 3 weeks left. Rehearsals are three times
a week for the first 5 weeks, and then much more frequent for the last week
(called tech week because we finally get to use the microphones and costumes as
we will in the actual performance). The rehearsals for the show are usually
very tiring. They only last 2 hours, but
displaying the range of emotions we are asked to demonstrate while simultaneously dancing and having good singing
technique is incredibly difficult. But even though it may seem grueling, the
rehearsals are always a blast. It is always an amazing experience to be
surrounded with such talent, especially when they all have a passion in the
same area as you.

6. Do you know any of the other performers for the evening?

Yes, we all know each other. But, the funny
thing is, almost every single person in the group has been in either the same
theater troupe, has acted, or had some sort of experience with each other
before rising stars. So, not only are we all able to perform together, but it
also gives us a way to reconnect with our friends from the past in a sense.

7. Tickets are $26 for the show. How does it feel that people will be paying to watch you perform?

It is the most thrilling feeling. To be able to
share the art of music and performance with anyone is an amazing experience.
The fact that we are giving money to such a great cause as well is all the more
exhilarating.

8. How long have you been singing / performing?

I got into singing and acting at about the same
time, both through different ventures, about 6 years ago.

9. Are you nervous or do you feel comfortable on stage? How do you prepare immediately before performing?

Nerves are always a part of performance, but
hopefully not in a sense that it makes the performer seem uncomfortable. Generally,
nerves are a good thing too, as they give you more energy, and most of the time
makes you more vulnerable, which usually creates more honest and authentic
performances. Usually, before a performance, I run over all of my lyrics, dance
moves and staging so that I will know that I have it all down pat. Also, I must
avoid eating certain foods, particularly dairy products, as those foods are
known for inhibiting vocal ability.

10. What are your interests / hobbies aside from performing?

I was on the Glens Falls High School varsity
swim team. I also spend a lot of my time doing homework, reading articles on
ESPN particularly about the New England Patriots, and I am as avid a Beyonce
Knowles fan as there ever has been on the planet.