The 2012 honorees of the 20 Under 40 Awards are being given awards and recognition at the Fort William Henry Hotel and Conference Center. Every year the Adirondack Regional Chamber of Commerce Young Professionals Organization and The Post Star chose 20 young business people out of the numerous people nominated that show excellence as tomorrow’s leaders. 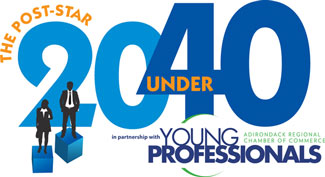 The honorees were chosen because of their dedication and success in their vocation, being a role model and active in their community volunteering. The award luncheon will be on September 25, 2012 and will start at 5:30 p.m. It is asked that reservations be made no later than September 19. It is $30 for a seat and a table for 10 is $280.

The honorees this year are: