You can be a part of the growing cycling community on Saturday mornings at 8:30 a.m. in front of their shop to join them on their “Bagel & Coffee Ride.” The Saturday morning bike rides are a great way to stay in shape and feel healthier throughout your weekend. I stopped by to find out more from both of the Fronhofer’s …. 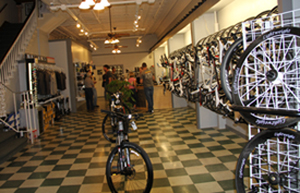