During a routine doctor’s visit in the bitter January winter of 2009, Glens Falls local Toby Dawes and his wife JoAnn never suspected their life would change forever. The pediatrician discovered a mass in their 18-month old daughter Charlotte’s abdomen. After lengthy tests at Albany Medical Center and Glens Falls Hospital, the devastating diagnosis was the rare liver cancer, hepatoblastoma.
After months of treatment, tears and hair loss (Daddy shaved his head, too!), Charlotte beat cancer at the tender age of two. She underwent two surgeries and four three-week chemotherapy treatment cycles, having one third of her liver removed. Today, Charlotte is well and happy, actively involved in swimming, dance, gymnastics and soccer. You would never have suspected she was battling cancer just a few short years ago.

But for this family, the fight was half the battle. Never forgetting their daughter’s courageous bout, the Dawes family gives back to the community to help raise cancer awareness by joining the American Cancer Society‘s Relay for Life team, Hearts of Hope, and starting their own personal fundraising campaigns. 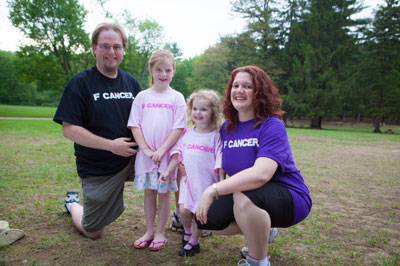 The Hearts of Hope team has been fundraising since 2009, run by team captain Lois Melito alongside her husband Eric. The team consists of five families in total, including the Dawes family. Bound and determined to “F Cancer” once and for all, the Melitos have spearheaded the “F(ight) Cancer” t-shirt campaign to raise money for Hearts of Hope. (Why, what did you think the F stood for?)

“The design came to my mind as I was trying to think of a simple to-the-point line of type that encompassed how we all feel about cancer,” said Eric Melito.

The t-shirt sales have already risen over $1,000 and will continue to be sold at cancer fundraising events and on his company’s website, One on 1 Design.

“This is a good way for us to start teaching Charlotte about giving back,” said Toby Dawes.

But Charlotte’s lesson in giving back doesn’t stop at t-shirts. The Dawes family also ran their own fundraising campaign this summer, Goodies for Gold Lemonade and Snack Stand, a Saturday afternoon lemonade stand in Glens Falls. Friends, family and strangers stopped to buy a refreshing drink this past July and August while helping to fight cancer at the same time. They beat their goal by 30% with the generous donations!

The Dawes will continue to “F Cancer,” as their t-shirts so boldly state. Looking to join in the fight? The American Cancer Society is the leader in both research support and patient/caregiver support. Relay for Life is a global fundraising mission with over 4 million fundraisers in over 20 countries.

Mark your calendars for some of next year’s Relay for Life events:

Check out other upcoming fundraising events in the Glens Falls region!