This Sunday, the town of Queensbury will celebrate the victories of the Queensbury Spartans sports teams. Beginning at noon, a parade will honor the football and girls cross-country teams for their recent state title wins. 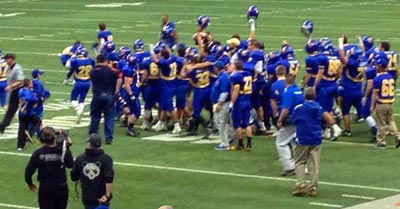 Both victories have launched the high school into statewide acclaim, prompting the idea for a commemorative parade. This Sunday, spectators can see the Spartan athletes ride on decorated flatbed trucks through Queensbury. They’ll also toss 6,000 pieces of candy to their fans.

The Spartan Day Parade will begin at noon on Sunday at the Elks Lodge on Cronin Road and continue north to Queensbury Town Hall on Bay Road. At Town Hall, town officials and coaches will deliver short speeches to congratulate the athletes and thank their supporters.

The parade is organized by the proud parents of the Queensbury Spartans, including father and Queensbury High School principal, Damian Switzer. The entire town is invited to celebrate “Spartan Day” and commemorate the champion players and the hard work and dedication they put forth to win state titles.

Go Spartans! Keep updated on new in the Queensbury area by following the GlensFallsRegion.com blog!