If you haven’t been to an Adirondack Flames game yet this season, NOW is the time to head to the rink! After just one hockey season at the Glens Falls Civic Center, the Adirondack Flames are packing their bags and heading west to California this September. 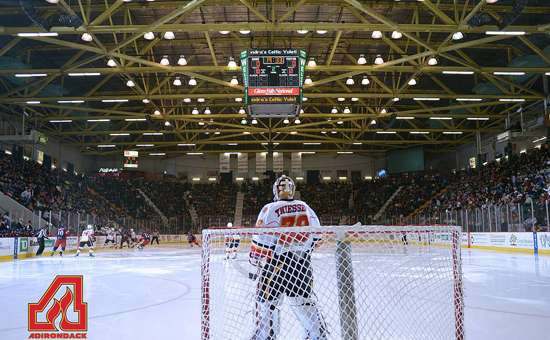 The Adirondack Flames (the AHL affiliate of the NHL’s Calgary Flames) are among five American Hockey League franchises that will be relocating to California for the next hockey season. Glens Falls’ beloved team is moving, along with AHL teams in New Hampshire, Virginia, Oklahoma City and Massachusetts, to form a Pacific Division.

Why are the Flames leaving, you ask? The main reasoning behind the move came from NHL teams in the Pacific time zone who wanted to have their affiliates located closer to their parent clubs.

The Calgary Flames general manager, Brad Treliving, spoke about the transition saying, “We’re currently in Glens Falls, which is a wonderful community. It’s been an excellent market for us, but those cross-country flights, dealing with a different time zone when you play a game on a Friday night and need a guy on Saturday, there’s a lot of challenges.”

While Glens Falls hockey fans are highly disappointed in losing the Flames, there is something to be excited about – the ECHL team (one rung below the AHL) from Stockton, California will play in the Civic Center next season! The new Glens Falls team, formerly the Stockton Thunder, will begin play in Glens Falls in the 2015-16 season. The new team plans to present its new name and logo at a later date. Tickets for the 2015-16 season will go on sale on Monday, February 16.

Before the Flames head off to palm trees and sunshine, root for the team at an upcoming game! Check out their full schedule here >>