Hometown USA – That’s what Look Magazine named Glens Falls in 1944 due to its combination of small-town charm and big-city amenities. The city was full of companies that provided good jobs and steady wages that residents spent at a wide variety of local five and dimes and department stores. Today, Glens Falls is finally returning to its former glory in the wake of a recent revitalization that repaired some of the scars it gained over the last 50 years or so. Returning to the 1940s and traveling forward in time will prove that Glens Falls rose, fell, and is finally rising again. 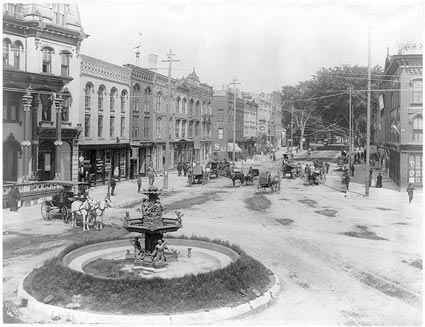 Photo: S.R. Stoddard via Library of Congress PPOC
In the 1940s, Glens Falls was a bustling, lively city. Businesses headquartered in Glens Falls and surrounding areas employed thousands of people, generating an upper-middle class level of wealth in the city. Finch Pruyn, Imperial Paper and Color Corp., and Glens Falls Insurance Company were three of the biggest companies at that time, and were accompanied by other businesses in the paper, insurance, banking, and cement industries.

>Downtown Glens Falls was full of large stores, including Sears Roebuck, B.B. Fowler Dry Goods Company, and Montgomery Ward, that often took up multiple stories of buildings. There were also a number of movie theaters, restaurants, and other things to do Downtown.

In the 1960s, though, things began to take a turn for the worse. The key industries that were so vital to Glens Falls began to close, which took wealth and high-paying jobs away from the area. There are many possible reasons for this phenomenon, but one of the most commonly cited was the construction of I-87, which began in 1957 and was completed 10 years later. Prior to I-87, people traveling to or from New York City took Route 9, which cuts straight through Downtown Glens Falls. When the Northway opened, traffic through the city lessened, which had a negative impact on local businesses. Industries also began to spread into the suburbs so they could take advantage of space for expansion and the transportation opportunities that the highway provided.

Although the changes happened slowly, residents realized what was going on. People stopped shopping and enjoying local activities as much as they had before, and many moved away in pursuit of better jobs. At the same time, Queensbury developed and grew, pulling people away from Glens Falls and becoming a more attractive destination for people looking to move to the region.

Over the next 30 years, Glens Falls existed as a shadow of what it had once been. The ornate buildings which used to be home to unique shops were boarded up and vacant. If locals wanted a nice night out on the town, they made the drive to Saratoga instead of staying in Glens Falls. The building of the Glens Falls Civic Center in 1979, which began the area’s professional hockey tradition, certainly helped improve Glens Falls’ appeal, but the most profound changes in the city wouldn’t come until the new millennium.

A new revitalization took hold of the city in the 2000s, which saw a number of construction projects that dramatically enhanced Glens Falls. Glens Falls Hospital, one of the largest employers in the region, embarked on a $65 million expansion project, which brought state of the art facilities and services, not to mention more jobs, to the region. The Charles R. Wood Theater opened in June 2004, bringing world-class performing arts to the area and drawing in crowds to eat at local restaurants and shop at local stores. In 2007, Centennial Circle, the roundabout at the center of the five key streets Downtown, eased traffic flow and made the city more pedestrian-friendly. In 2009, a 39,860 square-foot expansion of the Crandall Library was opened to the public. 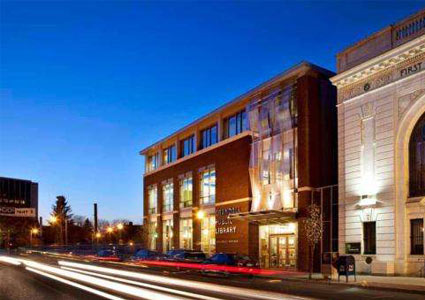 All of these projects encouraged more people to invest in the city. Rundown buildings were cleaned up and transformed. New restaurants and stores moved into previously vacant buildings. More people were able to realize their dream of being business owners. And, most importantly, residents began to take pride in their city again. On Wednesday evenings in the summer, you’ll see hundreds of people come out for Take A Bite, an event sponsored by the Glens Falls Collaborative that allows people to sample dishes from local restaurants while enjoying live music from homegrown talent. Looking around at a vibrant, bustling downtown on those nights, only one thought comes to mind – Glens Falls is undeniably Hometown USA.