We urge everyone to contact individual businesses to confirm their hours of operation before visiting, while we flatten the curve through social distancing.
Official Guide to the Greater Glens Falls Region
Enter Giveaways Advertise
Home  »  Events  »  Dragons Set For Home Opener

Earlier this year it was announced that the Glens Falls Dragons would be picking up where the Golden Eagles left off at the end of the 2014 season. Our new Perfect Game Collegiate Baseball League (PGCBL) team has been putting in some hard work to launch its brand and spruce up East Field, and the Dragons are now ready to take the field at their home opener next week! 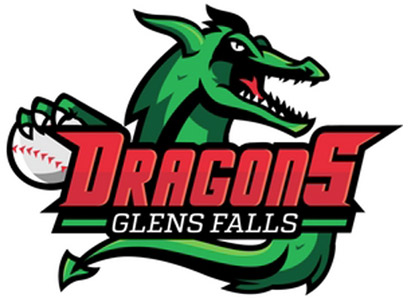 The Dragons’ roster is made up of 36 college baseball players ranging in age from freshmen to seniors and hailing from a wide array of schools, including Franklin Pierce University, Bucknell University, Binghamton University, and even UC Davis. The team’s 2015 season will kick off at East Field on June 2 at 7:00PM against the Amsterdam Mohawks and will run through July 30. If the Dragons make the playoffs, they could play all the way until August 7.

Dragons games are truly family-friendly events, and the team’s mascot confirms it! Even though dragons could be scary to youngsters, Cooper the Dragon (named for his home, Cooper’s Cave) is as friendly as can be. He was unveiled at an Adirondack Flames hockey game in April and was a huge hit! Since then, he’s made a number of local appearances, most recently marching in Memorial Day Parades in Glens Falls and South Glens Falls.

The Dragons’ Facebook page shows volunteers hard at work getting East Field in tip-top shape for Opening Night and players preparing to scorch the competition. Check out the full Glens Falls Dragons schedule and get ready to enjoy two months of great baseball and family entertainment!