If you drove along the Hudson River above Glens Falls last week, you may have noticed a number of structures protruding from the water. The Saratogian reported that the water level was lowered for dam maintenance revealing these wood-and-stone footings that recall an important chapter in the region’s history. 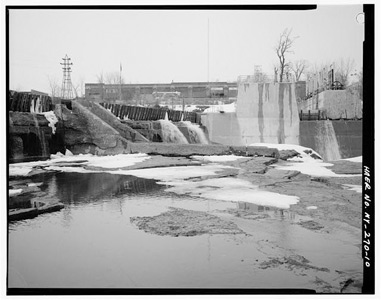 Photo: The log chute in the Glens Falls Dam, Gregg Troup via Library of Congress
As The Saratogian said, logs began being transported down the Hudson River in 1813, and continued doing so until 1950. They traveled from the abundant forests of the Adirondacks to mills downstream where they were processed and shipped throughout the nation. Initially, all logs were used for lumber, but as time went on, paper became the dominant, then exclusive use.

A number of piers were built in the Hudson to give workers time to separate the logs based on which mill owned them. It is the foundation of the piers that were visible in the river last week.