Lots has been going on recently in the Glens Falls business community! Check out these three headlines that caught our attention. 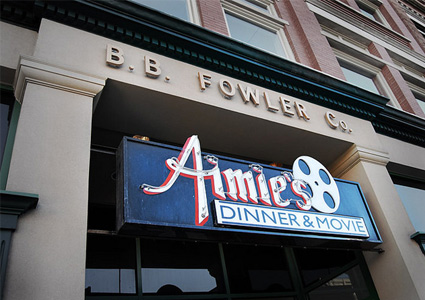 The 190 Grille & Cinema to Open in December

In September, JMZ Architects and Planners purchased the B.B. Fowler building on Glen Street that was formerly home to Aimie’s Dinner & Movie, and earlier this month, the plan for the building’s first floor was announced.

The O’Neill Family – who has been operating The Olde Post Grille in the Outlets – will be reviving the dinner and movie concept that Aimie’s left behind when they open “The 190 Grille & Cinema” this December. The Olde Post Grille will be closing at the end of this year, allowing the family to shift its attention to this new venture.

“We are aiming for an upscale, casual atmosphere that will appeal to the growing number of residents in the downtown area and reinforce Glens Falls as the cultural and entertainment hub for the region,” Heather O’Neill said in a statement. “I look forward to being there every day to welcome old and new friends.”

Glens Falls Food Co-Op has relocated to the Empire Theater building at 11 South Street, and has already hosted a volunteer meeting in its new space.

Keep an eye on the Co-Op’s Facebook page for details about a Grand Opening!

1000 Acres Ranch To Be Auctioned Off Today

Stony Creek’s 1000 Acres Ranch and Golf Course, along with related assets like saddles and heavy equipment, is set to be auctioned off today at 2:00pm. The auction was court-ordered after the ranch’s owner and founders’ son, John J. “Jack” Arehart, was unable to repay his debts.

The future of the property is uncertain, but The Post Star cited Stony Creek Town Supervisor Frank Thomas as saying “he hopes the property is purchased by someone interested in continuing its operation as a tourism attraction.”