One of Glens Falls’ summer staples is returning for a 22nd year, bringing spectacular theater to Downtown and beyond! 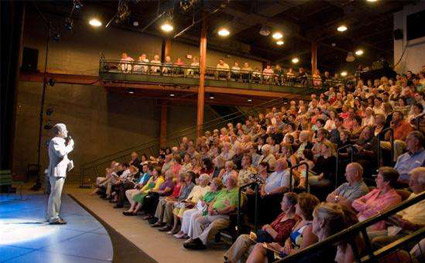 Adirondack Theatre Festival will kick off its summer production schedule on June 21 at the Charles R. Wood Theater. It will present a combination of mainstage shows and cabarets throughout the season, plus a staged reading and a dinner theatre for kids.

One of the highlights of the 2016 season is the return of 2015’s hit musical, The unCivil War! Abe, Mary Todd, General Grant, and all their friends will return to The Wood with new scenes and songs for two performances only on June 26 & 27.

Among the season’s other offerings are a thrilling musical, Island Song (June 21-July 2); a new comedy, A Comedy of Manors (July 12-22); a heartfelt musical, Home (July 28-August 5); and celebrity entertainment, Everything in its place: The Life & Slimes of Marc Summers (August 10-13).

Single tickets and season passes are both on sale online through the Wood Theater’s box office or by calling (518) 480-4878. Tickets are likely to go quickly, so browse the full 2016 schedule and reserve yours today!