In the third game of their Kelly Cup semifinal series against the South Carolina Stingrays, the Adirondack Thunder notched a 3-1 victory on Tuesday evening at the Glens Falls Civic Center! 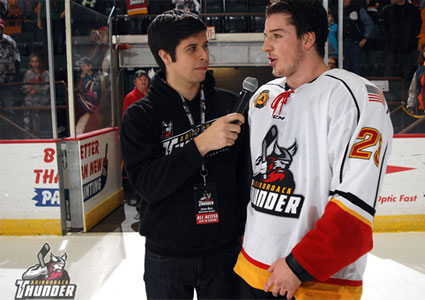 Photo: Andy Camp
Tuesday’s victory gave the Thunder a 2-1 lead over the higher-seeded Stingrays in the best-of-seven semifinal series.

The two ECHL teams will be back in action at the Civic Center for Game 4 on Thursday night and again for Game 5 on Saturday night. A Game 4 win by the Thunder would set the team up for a potential series victory in Game 5.