Few musicals are more timeless than Rodgers and Hammerstein’s masterpiece, The Sound of Music. Director Tim Nelson and his adult acting troupe from The Rose Center Theater in Westminster, California will bring the classic tale of the nun-turned-governess to the stage at Fort Salem Theater for three performances next weekend. 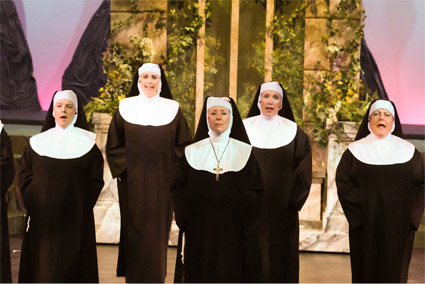 Photo provided by Fort Salem Theater
Based on a memoir by Maria von Trapp and popularized by the 1965 film musical starring Julie Andrews and Christopher Plummer, The Sound of Music features a number of instantly recognizable songs, including “Edelweiss,” “My Favorite Things,” “Climb Ev’ry Mountain,” “Do-Re-Mi,” and the title song, “The Sound of Music.” The original 1959 Broadway production won five Tony Awards, including Best Musical.

Every summer The Rose Center Theater returns to Salem to present a popular musical. Past productions have included Man of La Mancha, Phantom of the Opera, The Secret Garden, and another Rodgers and Hammerstein classic, Carousel.

In addition to the California-based actors, Nelson – who also works at Albany’s Park Playhouse – has incorporated some of the region’s most talented young actors, including Ariana Papaleo and George Franklin, into the Sound of Music cast.