The East Coast Hockey League (ECHL) has announced that the 27 teams that make up their league, including the Adirondack Thunder, have signed an agreement with the video game company EA Sports to feature the teams in its newest hockey video game NHL 17. 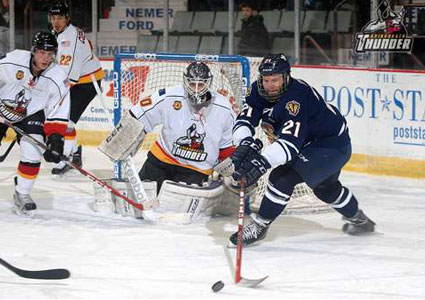 Photo Credit: Andy Camp
Including the ECHL in the popular game will give fans the chance to choose their favorite players and go head to head against rival teams. The game will also feature ECHL players that play in conjunction with the Professional Hockey Players’ Association. This will allow fans to play as some of their favorite stars, following them through their careers in the game as they progress to their respective AHL and NHL affiliate hockey teams.

Ryan Crelin, Senior Vice President of Business Operations of the ECHL, stated in an interview, “we are very excited to be working with EA Sports and include the ECHL teams in the NHL franchise.” He also said that the

NHL 17 game is “an amazing game experience” and that they are very excited to be able to allow fans to digitally interact with their favorite ECHL teams and players in the game.

Joining NHL 17 will give great exposure for the ECHL and will also bring more recognition to the smaller leagues that possess many players with hidden potential. It is something that the players of the ECHL have been excited about for a very long time,

and it should make the games that are played by ECHL teams even more exciting this year.

If you would like to learn more about NHL 17, you can visit the game’s special feature page. Fans can also sign up to become an NHL Insider and receive early access to news, trailers, behind-the-scenes videos, exclusive content, and more.

Root for your favorite team and check out the newest NHL 17 video game when it hits stores on September 13th, 2016!