Sometimes you hear a story that really touches you. The story behind the Timothy Conine Memorial Softball Tournament is one of those stories. In July of 2014, twenty one year old Timmy, as he was known, was the victim of a fatal car accident.

Trying to make sense of the tragedy, his family made the decision to donate Timmy’s organs and tissues to others so that Timmy could live on. During this difficult time, the staff from the Center For Donation and Transplant of New York and Vermont provided such incredible support to Timmy’s family, that his dad, Chris Conine, vowed to raise money and awareness for the organization as soon as he was able. 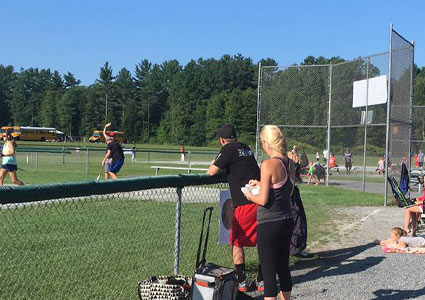 The Conine family, Timmy included, spent countless hours on the softball field. It was an activity that has always bonded this family, and so the idea for the Timothy Conine Memorial Softball Tournament was born. In August of 2015, just a little over a year after Timmy’s death, family and friends gathered to honor Timmy and host the inaugural two day event.

On August 27 and 28, 2016, while many folks were packed into the racetrack for Travers Weekend, sixteen teams and a few hundred fans gathered at the Ridge-Jenkinsville Park in Queensbury for the second annual Timothy Conine Memorial Softball Tournament.

The weather was perfect, a “bluebird” day, not a cloud in the sky. The energy, anticipation and excitement could be felt by all who attended. There were tents and play yards set up for babies, entire families gathered to support the teams as well as friends and family of Timmy who just wanted to be part of something so incredible. 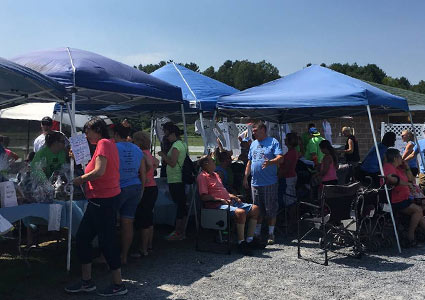 The tournament started with a two rounds of qualifiers. From there, the brackets were drawn for the double elimination tournament. Each team payed a $300 tournament fee and was guaranteed at least four games. Music played over the P.A. system, the concession stand volunteers fired up the grill with burgers, hot dogs and sausage and peppers and the raffle tent was open for business.

The raffle tent had something for everyone with over 60 raffle items donated by friends, family and local businesses. For kids there were Star Wars and Dory back packs and gift baskets, a child’s fishing pack, a bucket of Matchbox cars, Great Escape passes and plenty of Family Fun Night baskets. For the ladies, there were Spa Packages, Kitchen Baskets, Coach Earrings, Home Decor items and Pampering Baskets. For the men there was a Bass Pro Gift Certificate basket, a Cigar and Jack Daniels basket and Home Brew Kit.

Some of the items with big crowd appeal included a basket loaded with Saratoga Made Products, a basket full of over $300 in restaurant and merchandise gift certificates, a Golf Package, a basket from Texas Roadhouse that included dinner for two, a basket of Gift Certificates to Dine Around Glens Falls, an Outdoor Fire Pit and a Computer Tablet. 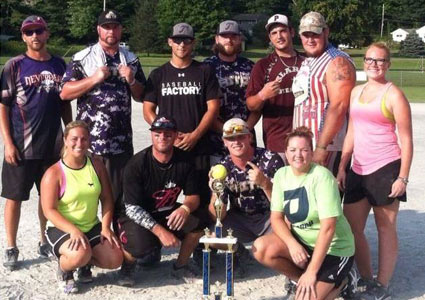 Two “Home Run” Sponsors got the naming rights to the fields, Telescope Casual and McDermott’s Harley Davidson and sponsor C.R. Bard’s name decorated the outfield on one of the fields. These fields really heated up on day two as the teams battled it out for the top spot. The victor was Triton Thunder! They went undefeated in the tournament. The winning team received a trophy and of course the bragging rights!

The real winner was the Center for Donation and Transplant of New York and Vermont. The tournament raised over $9,000.

I couldn’t help but feel lucky to have witnessed something so special. The love and support could be felt in every minute of the weekend. It’s the story of a family, touched by such a tragic event, that came together to honor a true hero, Timmy Conine. He lives on in the people who received his donation of life and in the family, friends, players and spectators who celebrated his life and his memory. Plans are already underway for next year. 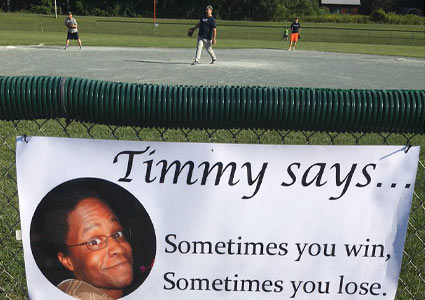 For more information or to help with next year’s event, please contact Chris Conine

Special thanks to the sponsors, and all who volunteered and donated to this truly amazing event.