Don’t miss the Canadian Pacific (CP) Holiday Train this Thanksgiving weekend! Now in its 18th year, the LED-lit Holiday Train will hit the rails once again and travel through the Glens Falls Region. At each stop, the train will collect local donations and feature a box car stage and live music! 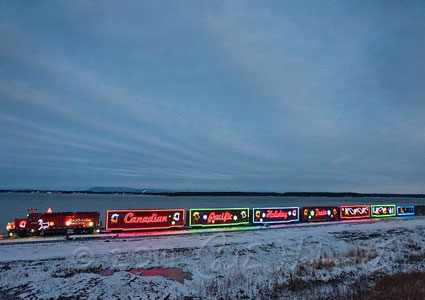 Photo Credit: Carl Heilman II
The CP Holiday Train isn’t an ordinary train. The rolling fundraiser is roughly 1,000 feet in length and its train cars are decorated in brightly colored holiday lights. The train visits multiple communities during the holiday season to collect food and monetary donations. Everything collected at the stop stays right in that local community.

Additionally, not only does the Holiday Train raise money and food for communities, but it also hosts concerts at its stops. The 2016 musical lineup is all-Canadian, and it will feature Canadian Country Music Award and Juno Award winners!

The CP Holiday Train actually consists of two trains: one will tour Canada, and the second will begin its U.S. tour on November 25 when it leaves the Montreal area.

On November 26 & 27, the Holiday Train will visit the Glens Falls Region and stop at several locations, including:

In a press release, Pam Jolliffe, Interim Executive Director of Food Banks Canada, said, “We are very excited about this year’s CP Holiday Train and are encouraging all event attendees to bring healthy, nutritious items to the shows.”

Along with bringing food items to donate, attendees can help spread word of the Holiday Train by posting photos on social media and using #HealthyDonations. If you enter the “Capture the Spirit” photo contest on Facebook, you’ll have the chance to win a ride on next year’s train.

Remember, the Holiday Train only stays at one station for 30 minutes, and then it heads toward the next. You won’t want to miss the Holiday Train when it rolls through the Glens Falls Region on Thanksgiving weekend!

Get the Holiday Train’s specific dates and times here >>