Not only are the Adirondack Thunder near the top of their division, but the hockey organization has worked hard to give back to the community this holiday season. Over 1,500 canned foods and coats were collected at recent Thunder events, and the next donation opportunity will be at this Saturday’s game! 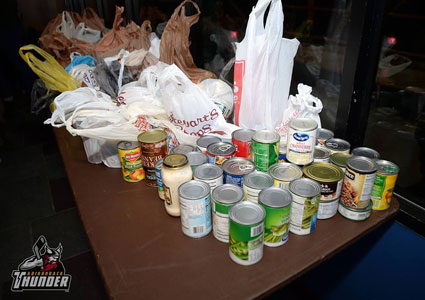 Photo Credit: Adirondack Thunder
The Adirondack Thunder held their second annual November Coat Drive at three home games on November 22nd, 26th & 29th. Anyone who donated a new or lightly worn coat at one of these games received a complimentary Silver Flex Ticket.

426 coats were donated over the course of three days, which was 75 more than what was collected by the Thunder last year. All of the coats have been donated to the Moreau Community Center in South Glens Falls and the Salvation Army in Glens Falls.

The Thunder’s next charitable drive was even more successful. A canned food drive was held during the December 3rd home game, and 1,200 non-perishable food items were collected, 400 more than last year. The canned foods have been donated to the Salvation Army and the Open Door Mission in Glens Falls.

In addition to these charitable drives, the Thunder have contributed hours of community service, including a visit to the Open Door Mission. It is all part of the Thunder’s new marketing campaign for the 2016-17 season – “This Is Our Team.”

For the team’s next home game on Saturday, December 17th, there will be a Teddy Bear Toss to benefit the Salvation Army. To participate, fans are asked to bring stuffed animals to the game, and then throw them onto the ice after the Thunder’s first goal. The toys will then be collected and donated after the game.

Saturday’s game will be against the Brampton Beast, and it will begin at 7:00pm at the Glens Falls Civic Center. Get your tickets now, and don’t forget to bring a stuffed animal!