A sport that has never been experienced in the Glens Falls Region is coming this spring – indoor football.

The professional indoor football team will be playing at the Glens Falls Civic Center – here’s how this ended up coming about, and what the team still needs to get started. 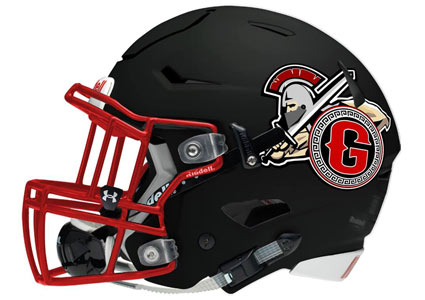 The Gladiators’ red and black colors with their helmet and sword logo were revealed recently as new details come to light about this unique sport coming to our area. This team will be playing in the new Cam-Am Indoor Football League, which is comprised of nine teams in the Northeast.

“I’ve been working on this for three years,” Hank Pelton, the Gladiators’ corporate president, told The Post Star. “It’s never been tried here before. Yes, it’s new. We are rich in sports history here in this city. It’s a hockey town, but with the support I’ve seen come forward in the last three years, this will work. I’m very, very confident about it.”

Indoor football is what you’d likely expect – a scaled-down version of classic football. This is a fast-paced game played on a 50-yard field inside a traditional hockey arena. There are padded dasher boards as sideline boundaries, and narrow goalposts on each end with netting to prevent footballs from reaching the crowds.

The Gladiators will carry up to 28 players with 22 being active for each game. Pelton has been speaking to a potential head coach who has arena football experience.

What’s Left to Do

Start-up costs are estimated at $250,000. Pelton has indicated many have come forward who are willing to financially back this venture.

The team is also utilizing a membership program – fans can purchase a membership for $500 which includes season tickets for two years, a merchandise package, and other perks, with proceeds going towards the start-up costs. Nearly 200 membership tickets have already been purchased. Single game tickets will be in the reasonable range of $15 to $35.

“The pricing is right. It has to be cost-effective and it has to be an entertainment value,” Pelton told The Post Star.

In addition, the team still needs to purchase equipment and have players try out. Tryouts are going to be held in January and February at the Chase Sports Complex, and practices are expected to start in March.

Pelton has been approached by individuals who have played at the college level; he’s also considering those who have perhaps tried out for NFL or the Arena Football League and didn’t make the cut. Other local talent will be considered.

Between the local support, the plans for funding, and the conversations already happening with potential players and the possible coach, Pelton feels largely optimistic about this undertaking; he also feels the Civic Center is a perfect size for indoor football.

In the meantime, check out what’s happening at the Civic Center now, including local hockey games and public skating.