The Open Door Mission announced in early January that they will be opening a new door for those in need in the Glens Falls region in the former Warren Furniture building at the corner of Platt and Warren.

At a special meeting to publicly announce the Pathway Home Capital Campaign and showcase the building, Executive Director Kim Cook reviewed the multi-phase project which will use local, regional, federal, and community funding to provide a significant increase in services to the Glens Falls community. 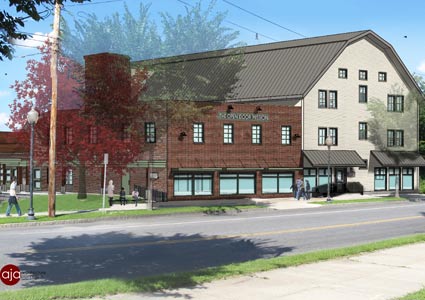 Rendering of future site, image by Phillip Coltart Films, future building from AJA Architecture, image provided
The Open Door began serving the Glens Falls community on September 5, 1991 with hot meals out of an RV in a parking lot on South Street. 25 years later, the Open Door has provided nearly 1,100 nights of Code Blue shelter, up to 900 pantry boxes annually to families in need, and over 19,000 meals served to hungry members of the Glens Falls community in 2016 alone.

The new building funded by the Pathway Home Capital Campaign will allow the Open Door to further expand their services. Plans include offering

One of the community members helped by the Open Door said: “It’s hard when you’re out there and you don’t have a whole lot of help. When you go to the Open Door, you can get help and they don’t turn away from you. It’s like coming home. You get fed but there’s also relief and you can be at peace.”

Executive Director Kim Cook sees the Open Door’s mission as vital for the future of the Glens Falls community. “Poverty and homelessness are increasing in our area,” said Cook. “Even as our downtown is seeing revitalization, many are being left behind. Glens Falls is better than this. It’s Hometown USA! How can we be OK with anyone not having a home or food to eat?”

A sustainable community requires helping the homeless and those in need move forward. According to Cook, “there is nowhere for someone who is homeless to get stable and move forward. Many of those who are housed are still not stable. They don’t know where to turn. We believe that offering these programs in a safe place where people are given love and respect is key in making a difference.”