Have you ever traveled abroad and been inspired to create, write, or change the way you think about things? Many artists during the 1800s had a similar experience, and The Hyde Collection has compiled some of the resulting pieces for its new exhibition. 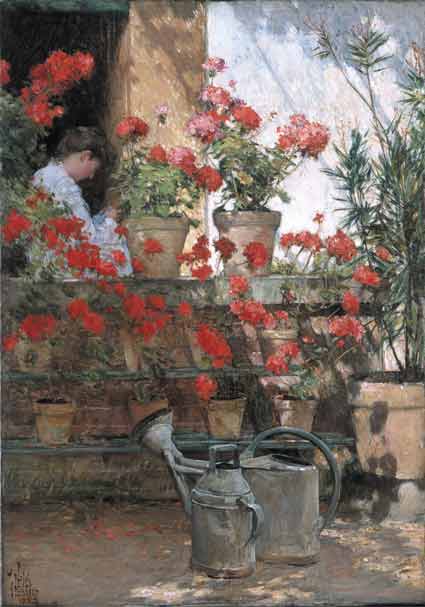 Childe Hassam, American, 1859 – 1935, Geraniums, 1888-89, oil on canvas, 18 1/4 x 12 15/16 in., The Hyde Collection, Glens Falls, New York, Bequest of Charlotte Pruyn Hyde. 1971.22. Photograph by Michael Fredericks.
The featured works for this exhibition, drawn from The Hyde’s permanent collection, were created by American artists who were inspired by their travels to Europe.

Prior to the Civil War, Americans did not yet have established art schools and institutions, so they often found motivation to create from places they traveled, particularly in Europe. The cities, the people, the monuments, and the art collections found in Europe in the 1800s are what made it the cornerstone of Western culture.

Here are a couple examples of famous artists who drew inspiration from overseas:

“Americans go as students or as established artists, but they both come back with distinctly American versions of movements they encountered in Europe,” Jonathan Canning, Curator of The Hyde, said in a statement.

American Artists in Europe is on display now through June 11th at The Hyde.

Check out other galleries in the Glens Falls region >>