The wonderful biking trails in the Glens Falls Region are one of the reasons why so many bicyclists love exploring the area. While there are plenty of trails in Queensbury and Glens Falls, there’s one thing that could make biking in the region even better – a trail network! A local group has proposed connecting the region’s existing trails so it can eventually be a part of a state-wide trail system. 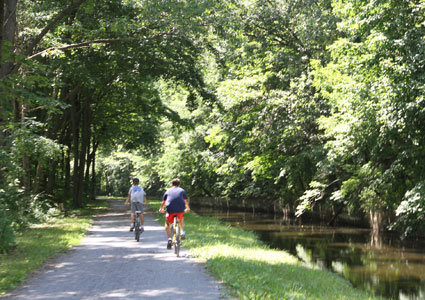 This groundbreaking proposition was announced by the Warren County Safe & Quality Bicycling Organization. Their goal is to develop a North/South Hudson River Connection that would link biking trails in Glens Falls and Queensbury.

At the moment, to reach the Feeder Canal Trail in Glens Falls, a bicyclist in Queensbury would have to travel from Rush Pond Trail to Warren County Bikeway, and then bike miles down it to the Feeder Canal.

To make this trip easier for Queensbury bicyclists, the proposition calls for three new connector trails:

The North/South Hudson River Connection would be unpaved to reduce costs, and much of it would run along National Grid utility line right-of-way land. In addition to improving accessibility for bicyclists in the Glens Falls Region, the trail network would connect to the Empire State Trail.

Proposed in Gov. Cuomo’s 2017 State of the State Agenda, the $200 million, 750-mile Empire State Trail is expected to run from Buffalo to Albany and Manhattan to Canada. In the local area, it will travel along the Hudson River-Champlain Canal Corridor and connect to the Feeder Canal Trail.

As such, a North/South Hudson River Connection would be perfect for Queensbury bicyclists interested in biking the future Empire State Trail.

At a recent meeting, the bicycling organization suggested that Warren County could provide the group $150,000 in funding in anticipation of future state grants for the project. The group brought up occupancy tax funding as another source that would be re-paid later through state grants. Their funding request has not yet been addressed by Warren County.

Nevertheless, the creation of a bike trail network is an exciting project that would help transform the Glens Falls Region into a true biking destination.

Learn more about the plans for the NYS Empire State Trail >>