Glamping, or glamorous-camping, is a trend in luxury, insta-worthy camping that has been growing in popularity over the past few years. Glamping companies provide large tents with all the amenities of a hotel, but in the great outdoors. If you’re picturing lush bed coverings, romantic mosquito netting, and strings of twinkling lights creating an almost magical atmosphere, then you’re on the right track.

Earlier this year we started following the story of glamping company Adirondack Safari’s quest to bring glamping to the Warren County Fairgrounds. 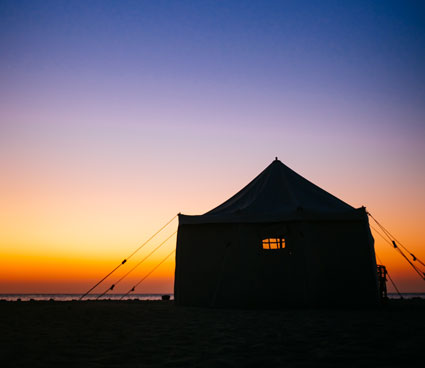 In early March, Adirondack Safari was given a green light to set up glamp sites at the Warren County Fairgrounds this May-September.

After questions and negotiations with county leaders, Adirondack Safari has agreed to 50 tents (instead of the planned 60) and shortened the season to end on September 10 rather than early October.

Co-founder Mark Matteo told the Post Star, “We really think there is some great economic impact that would come from our proposal.” Jennifer Matteo said that their glampers spend an average of $100 per day in the surrounding communities and Mark estimated that the business would likely bring in 2,000 visitors a year who stay for 2-3 days on average.

Last year Adirondack Safari operated at the Lake George Escape Camping Resort, where tents rented for $219 to $249 a night. This year the company plans to allow tubing on the nearby Schroon River, but not establish a swimming area.

Since the fairgrounds have not been used much in the past few years, many feel this is an excellent use of the parcel that could not legally be sold unless it was replaced by other park land. Adirondack Safari will also be taking over the utility costs for the property while the campsites are active.

Residents and visitors worried about the impact to the annual Bike Rally can rest easy: camping will not be offered during the first week of June during the annual Warrensburg Bike Rally.

Discover what else is happening in the Glens Falls Region >>